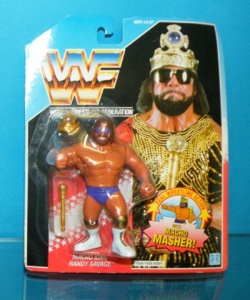 The World Wrestling Federation exploded in popularity in 1984 along with Hulk Hogan’s meteoric rise to prominence with both becoming household names. Vince McMahon was certainly a genius at promoting his product and he was quick to capitalize on the toy market by signing a deal with toy producer LJN in 1984. Anyone reading this probably remembers the line of LJN figures called Wrestling Superstars. The figures were made of heavy rubber about 8″ tall and realistically painted. They had absolutely no articulation but did usually come with several accessories. Unfortunately the paint had a tendency to wear off rather easily. In 1989 LJN shut down their toys division and the relationship with the WWF came to an end.

The following year Hasbro stepped in releasing their own line of WWF action figures in 1990. The toys were completely different than the LJN figures of years past. Whereas the LJN Wrestling Superstars figures were large and realistic looking, Hasbro made the toys about 4″ tall with a very cartoonish larger than life appearance. They were more poseable than the LJN toys but rather than articulated limbs Hasbro incorporated action features. Generally this meant that the figure had some kind of spring loaded arms that could be used to punch or slam the competition.

By 1990 I had accumulated a fairly large collection of LJN’s WWF figures and as a result my parents were not to pleased with the change of scale. They viewed it as a way for the WWF to force parents into repurchasing toys of characters they’ve already bought if they wanted to buy any new wrestlers. Of course that wasn’t the reality but I can understand the frustration. If I dropped a small fortune on toys for my kid only for the company to go in a new direction I’d probably be a little peeved also. That said, they’re just toys so I guess you can’t get too angry.

In 1991 I finally received my first Hasbro WWF figure for my birthday: Hulk Hogan with Gorilla Press Slam wearing his famous Hulk Rules t-shirt. I really liked it and was excited to receive it. Unfortunately a Hulk Hogan figure by himself is of little entertainment value. Without a nemesis a wrestling figure can be a pretty boring thing. As a result I managed to talk my parents into taking me to Toys R’ Us where I would spend some birthday money on a companion figure to battle with my Hulk Hogan. I knew all along which wrestler I was going to purchase. Hulk Hogan had several memorable feuds over the years, but in my mind there was only one man that could be considered the true enemy of Hulkamania.

Long before the Pay Per View event of the same name, the WWF used to have the title of “King of the Ring” bestowed on one of it’s wrestlers. The first King of the Ring was “The Rock” Don Muraco who won the tournament in 1985. Harley Race won the 2nd tournament in 1986 and proclaimed himself “King”, ignoring whoever won the tournament in the years that followed. This would result in several feuds over the title of King. He even came to the ring wearing a regal robe and crown. After a career ending injury, Race’s manager Bobby “The Brain” Heenan bestowed the title of King onto another one of the wrestler’s in his stable Haku, rechristening him as King Haku. Thus the battle for the crown began. Haku would eventually lose the title of King to Hacksaw Jim Duggan in the spring of 1989. Duggan paraded around as the King through the summer until he eventually lost to the Macho Man Randy Savage in the autumn of 1989. Macho Man had a regal ceremony to celebrate his coronation and was proclaimed “Macho King” by his real life brother The Genius. He even went so far as to bestow his manager Sensational Sherri with the title Sensational Queen Sherri and forced a bunch of jobbers to carry him to the ring on a throne. 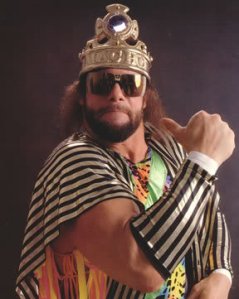 That introduction went on a lot longer than I expected it to. Pro wrestling has always been one of my passions so I guess I have a habit of getting carried away when discussing it. But now with five paragraphs full of background information behind us we can actually get to the subject of this post, the 1991 Hasbro figure of the Macho King Randy Savage! In my eyes Hulk Hogan and Macho Man (or King in this case) were like two sides of a coin. They had a natural rivalry. Like fire and water, day and night, Packers and Bears, cowboys and indians, God and Satan, yin and yang, and so on you had to have the Hulkster vs Macho.

Think back to a childhood trip to the toy store. If you had cash in hand to spend on a toy it was typically an arduous journey as you meandered up and down the aisles aimlessly wandering in search of that one toy that piqued your interest enough to spend your precious few dollars on. Money was even harder to come by in childhood than it is now, so you didn’t want to carelessly fritter it away. No your thought process was quite deliberate because you knew that whatever you were buying you were stuck with until the next birthday or Christmas. Careful planning was in order to avoid future regret. For once, such hem hawing did not occur on this venture. I may have set a record in brevity. Even my dad who was waiting in the car commented on how quick we were in and out of the store. I knew going in what action figure I needed and was neither distracted nor dissuaded by my surroundings. To this day it is with much clarity that I remember walking straight to the Macho King, picking him up, and saying “alright”. If only every major turning point in my life could be approached with such decisiveness and assurance!

This was the second Macho Man figure in the Hasbro toy line. The first figure released was based on his traditional gimmick. A coronation not only freshened up the Macho Man’s persona but enabled Hasbro to cash in by releasing a new action figure. This version came complete with a crown and scepter and featured the “Macho Masher”. The figure’s hips would twist and a spring inside would snap his torso back allowing Macho to clothesline or punch his competitor. Aside from the twisting hips, this figure was articulated at the neck, the shoulder of his left arm, and the biceps and elbow joint of his punching right arm. 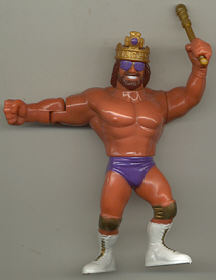 Hasbro did a great job with the likeness as this figure is dead on. Macho’s patented crazy sunglasses are present as well as his trademark beard. The crown fits well on his head and the scepter fits in his left hand allowing him to smash it over the head of the Ultimate Warrior. This figure features purple and gold wrestling attire with “Macho King” accurately printed on the back of his tights. Overall it’s a well done figure that does justice to the source. Anyone who’s ever seen a Slim Jim commercial could close their eyes and envision the Macho Man. Snap into it!

Seven year old me made a wise decision purchasing this figure as it provided many years of enjoyment. Hulk Hogan had his nemesis, I never experienced any buyer’s remorse, and years later I would be able to write a tribute to him to provide some content for my website. It was a win all around on many levels. Eventually I would sell poor Macho King on eBay along with several other WWF figures in an effort to clean house and make some scratch. Money comes and money goes but memories last a lifetime.

Macho Man provided several memories over the years for myself and millions of people around the world. When you’re a fan of pro wrestling unfortunately you see a lot of your favorite performers die far too young. I wouldn’t say you get used to it but with the news of another wrestler’s death you begin to take on the mentality of “here we go again”. But when Macho Man died in 2011 it hurt. That isn’t intended as a slight towards any of the other wrestlers that passed away but the news of the Macho Man’s death forced me to stop what I was doing and really reflect. He was an integral part of so many great memories from my childhood that it truly felt like the passing of a friend. Hopefully somewhere in the universe the Macho Man’s spirit can crack a small smile on this little tribute. OOOOhhhhhh yeaaah!

Below is a video of the coronation of the Macho King Randy Savage from WWF Superstars of Wrestling, September 30, 1989.  What a great segment!