I was fortunate to grow up in a time when kids still actively played with toys and video games were not the only show in town. Although the NES was certainly a huge part of our lives, and later the 16 bit video game systems would dominate lunch time table talk, video games did not overshadow toys in our hearts and minds. I’m sure there were some kids that shut themselves in a room all afternoon playing some game most of us had never heard of at the time like Shadowgate, but the average child seemed to be well balanced. Most of us would get home from school, play outside with our friends, go inside and watch a bit of TV before dinner, adjourn to our living rooms to tune to channel 3 for an hour or so of NES action, and then we’d play with toys until it was time for bed. Homework surely got in the way of some of that but we have a tendency to block out the more somber aspects of our youths. At any rate, most children from my generation had several interests that we pursued which broadened our horizons.

As far as toys go, few resonated with me as much as Lego sets. Every day you could create something new from the same pile of bricks with the only limitation being the boundaries of your imagination. Lego was also at an aesthetic zenith in that era as far as set quality and design are concerned. Every theme had multiple sets that caused toy lust induced drooling.

In 1990 my grandmother decided that she was going to take me to the store and pick out any Lego set I wanted as a present for my upcoming birthday. Money was no object and nothing was off limits. My grandma was an immigrant and she always encouraged me to own toys that were produced in continental Europe as she considered them to be of a higher quality. Lego particularly appealed to her as she felt the concept encouraged inventiveness. I could not have cared less about their perceived educational qualities. I thought they looked freakin’ awesome.

I still vividly remember walking up and down the aisle at Children’s Palace staring at a sea of yellow boxes. The large sets also had flaps on the front that would raise up to showcase a few of the special pieces it contained. I took my time opening every flap and listening to the suggestions of my mom and grandmother. As a reminder, here are just a few of the cool higher profile sets still available in 1990: 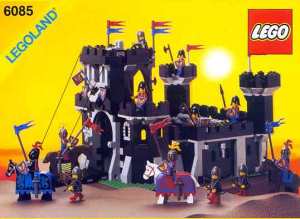 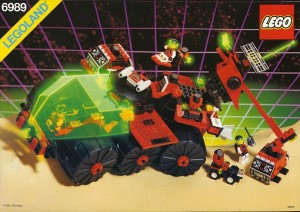 Most of those retailed at around the $100 range. Considering that price was not a factor, surely any kid would be intelligent enough to pick one of, if not the most expensive set. The higher the price tag, the more pieces it contained and the bigger the finished model would conceivably be. Having said that, I of course would choose a set that retailed for $58 bucks; roughly half of what the top sets were selling for. No wonder I was never chosen for the advanced placement classes. I can still remember my mom urging me towards either the Black Monarch’s Castle 6085 pictured above, or the Black Sea’s Barracuda #6285. Both had more pieces and were more expensive.

Instead I stuck with my gut and I chose the $58 set #6081 King’s Mountain Fortress. Why was I so adamant about picking up that particular set? It came with a ghost, and that was one of the new pieces at the time. I should mention that the same ghost figure that came with this set was also available in an $8 set that I probably could have gotten as a stocking stuffer late that year. Damn, forget the AP classes, it’s a wonder I wasn’t put into remedial everything. That glow in the dark hunk of plastic was smiling because even it realized what a dumbass decision I was making and was having a good laugh.

So now that it’s been proven that Lego sets obviously don’t make a child any smarter we may as well discuss the set at hand. Aside from the infamous ghost figure, the King’s Mountain Fortress did have some other things going for it that made it unique. First of all it included some knight’s on horseback with the new (in 1990) helmet and armor pieces. Those knight’s looked so much better than the plain looking ones with the plate armor printed on their torsos from previous years.

Secondly the set included a maiden which was uncommon in those days. That maiden figure proved to be the focal point of most of the battles my kingdom’s would wage against one another. As in most fairy tales the maiden figure would get kidnapped by the army of evil knight’s, creating a rescue the princess scenario. Lamentably for the maiden however, in my tales she usually ended up being tortured, beheaded, and dismembered with her body parts being strewn about Legoland. I’ll give the maiden credit, she managed to keep a smile on her face the whole time. 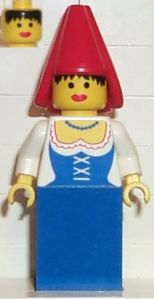 As for the castle itself, it was certainly an interesting design. A wall went right up the middle of the set splitting it into an “interior” and a courtyard. The interior was monopolized by a large ramp however and nothing else of note. Above the top of the ramp was a tower which provided the only real “room” of the entire castle. Inside was a trap door that had to be one of the functionally worst Lego had ever produced. There was a pin on the back of the set that you would pull back, conceivably activating the trap door but in reality it didn’t do anything. You had to physically push down on it to get it to drop which defeated the point. I even realized this fact back then and I’ve already proved what a moron I could be.

The courtyard contained a jail and a cellar area where a treasure chest was kept. Our poor maligned princess spent a lot of time in both locations. The curtain wall was quite short, only two bricks tall. This set relied on the raised base plate to give it height. Otherwise the wall is short enough that an enemy attacker could simply step right over it. Lego clearly hadn’t mastered their design concepts quite yet using this ramp and pit plate.

Overall it’s certainly not a bad set nor is it a great set. It does have a lot of sentimental value to me though. Although I probably made a poor decision picking this set given the other available options in retrospect, the experience I had getting to choose it and the circumstances surrounding it are still special to me. As a six year old you are rarely given free reign to choose anything you would like. That feeling of power and freedom without restriction was an amazing sensation. Pouring over my options and looking at every set in detail created a wonderful memory. As a result the King’s Mountain Fortress will always be among my favorite sets Lego ever produced.