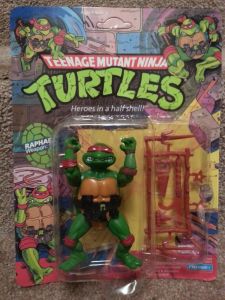 In my post about the Teenage Mutant Ninja Turtles NES game I mentioned that the Ninja Turtles were less a popular cartoon and more a phenomenon in the late 80’s and early 90’s. The marketing blitz encompassed every facet of childhood life but the two most important products to children were the video games and the action figure line. Playmates started cranking out the action figures in 1988 and kids couldn’t get enough of them. Despite exhausting the well of characters within the first few waves of releases, Playmates was still able to sell toys by making kids believe they had to own several different versions of each Ninja Turtle. It wasn’t enough to simply have a Leonardo action figure. It was imperative that you owned a Leo that could duck his head into his shell, “mutate” into a pet turtle, wore army fatigues, dressed like a samurai, donned football pads, looked like a rock star, or God knows what other gimmicks they shelled onto the public after my interest ran out. I just said “shelled onto the public” while discussing Ninja Turtles figures. Splinter would be proud. 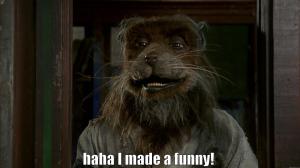 Despite all these variations floating around most people would generally agree that the original versions of the Turtles were their most cherished and memorable. Typically an impressionable young child would be watching Saturday morning cartoons and happen to catch the Teenage Mutant Ninja Turtles animated series and get hooked. This caused them to start asking for the toys. In other cases, kids would hear about the show through word of mouth or view it while at a friend’s house and the mania would spread. In my case the opposite was true. Back in 1988 I was firmly entrenched in the Real Ghostbusters camp and was dedicated to watching that show and asking for those toys. In those days I more or less expected to grow up and become a Ghostbuster so watching the show was considered viable training for my future profession. Quite by accident someone purchased me a Ninja Turtles figure. My mom had to read the story of the Turtles that was printed on the cardback to me as well as the cut out profile card on Raphael in those pre-literate days. It’s funny how just a few sentences on a cardback seemed like an epic tome in those early years. The premise seemed intriguing enough so I decided to give this Ninja Turtles thing a chance and made an effort to tune in during an early morning broadcast. Little did I know that it would become an obsession over the next four years. 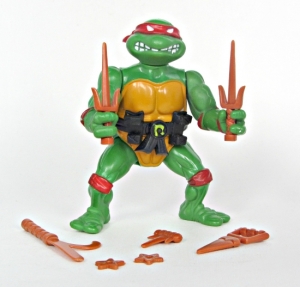 My first Ninja Turtles figure was the original Raphael which is interesting. He would go on to become my favorite Turtle, which I suppose you could attribute to the fact that he was the first I encountered. My theory however is that every kid’s favorite Ninja Turtle was the one that mirrored their personality the most. My more intellectually gifted friends preferred Donatello, the bookworm scientist that managed to think through problems. One of my airhead neighbors loved Michelangelo, the mentally handicapped Turtle. Me? I liked Raphael, the sarcastic smart ass that would tell it the way he saw it. The airhead Michelangelo lover went on to grow up and be a bigger version of his childhood self. The Donatello fans matured into quiet introverts. I suppose you can make your own inferences.

The figure itself was well done. Articulated wrists, elbows, head, shoulders, and legs generally meant there weren’t any encumbrances when playing with the toy. It also came with a boatload of awesome ninja accessories. You got two of Raph’s signature sai’s, two throwing stars that would promptly be lost in the shag carpeting, and then… well I’m not sure what those other things are. See for yourself: 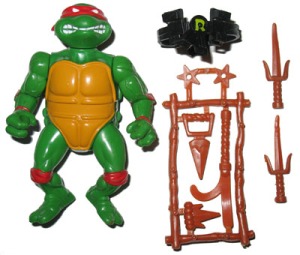 I don’t remember using those other things much in my adventures but they were there. For whatever reason I found it impossible to force myself to throw out the frame of the weapons tree. I mean, it looked like it could be something useful right? I’d pull all the weapons off of the tree and keep that little frame for years. Actually the frame probably lasted longer than most of the weapons did. I should have left them on there since I only remember Raphael for using the sai’s anyway. Raphael’s belt was removable but those things were a pain to get back on. After taking it off once you learned your lesson. I also recall the head’s of those figures were a hollow rubber and sometimes if you squeezed them in they’d stay stuck that way unless you popped the head off. Good luck trying to reattach it to the neck post. On an unrelated note I had a friend of mine lose the head of his Riddler action figure for all time when he pulled it off and lost it down his bathtub drain. The perils of childhood. 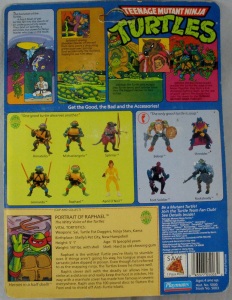 As great as the toys were, the packaging itself was equally well done. Even as a child I remember wanting to save the cardbacks for these figures because the artwork and story was so interesting. Just taking a look at that packaging brings so many memories flooding back. The little comic at the top, the profile card, the pizza points I had forgotten about. I wonder if you could redeem those for anything? I had nine of those ten figures pictured with the only omission being April O’Neil. A friend of mine had the April figure and I seem to remember thinking it was not a very accurate likeness and her only accessories were camera’s and microphones. That’s a major pass when competing figures oozed slime.

Before long The Real Ghostbusters was canceled and Teenage Mutant Ninja Turtles was atop the Saturday morning hierarchy. The phenomenon would lead to three feature films in the 90’s, video games across all platforms, and multiple reboots that have continued to keep the franchise relevant even to this day. For me it all began with this single action figure.