I picked my Nintendo 64 up in the summer of 1997 after saving my grass cutting money for several months. After blowing through classics like Super Mario 64 and Mario Kart 64 it was time for a new addition to my game library. In the autumn of 1997 I went to a party at a friend’s house and one of his pals brought over an N64 console and several games. Without question the game that stood out most in all of our minds was Goldeneye 007. Of all the kids present only one or two had even heard of the game up to that point but by the end of the party our collective socks were knocked off by it. Goldeneye was a must own game in the same class as Super Mario 64. 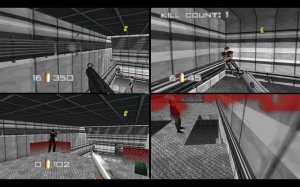 Game releases for the Nintendo 64 were spread pretty thin, especially in the early days of the console, so when a good game was released N64 owners rushed to buy it. Movie based games were usually of low quality, and Goldeneye was developed by a company called Rare with a team comprised entirely of staff members that had never worked on a single video game before. Needless to say, expectations were low. N64 cartridges cost an estimated $30 to produce at the time so the high manufacturing costs combined with the low expectations resulted in a small production run. The game couldn’t be found anywhere for months. I begged my mom to drive me from one store to another looking for Goldeneye from the fall of 1997 through the spring of 1998 when I finally got lucky and snagged a copy.

In those months between actually finding Goldeneye however, I picked up a few other games. My mother would drive me to the store with cash in hand to purchase Goldeneye, and after several strikeouts I would decide to settle for something else. At that age it was hard to go to a store with your heart set on buying a new video game and come home empty handed. Wave Race 64 was one of the games I picked up as a result of not finding Goldeneye at retail.

Released in 1996 shortly after the launch of the Nintendo 64, Wave Race was a unique racer. Rather than zipping cars around a track the races involved Jet Ski’s bouncing around the ocean. Despite not being a huge racing fan I did enjoy Ridge Racer and Ridge Racer Revolution on the PlayStation and after reading good things about the title decided to take a chance. Unfortunately for Wave Race, the game I really wanted to purchase was Goldeneye so the game had a taint from the start. To this day I have bad taste in my mouth regarding Wave Race as a result of that disappointment. Honestly it isn’t the game’s fault. It’s a solid title for the most part, but my heart was set on Goldeneye.

As soon as I got home from the store I popped Wave Race 64 into the cartridge slot and turned on the system. I was greeted by the introduction which follows a few jet skiers racing around a spot called Dolphin Park while a dolphin swims with them. A voice sample then says “Wave Race”. Keep in mind that the 5th generation of games was the first to use voice samples that didn’t sound tinny and synthesized so this was actually an impressive effect at the time. The game also publicized that they used models of real Kawasaki Jet Ski’s. I wouldn’t have any clue how a knock off jet ski would differ. Maybe there was some kid on a yacht off the coast of California that played this game in his cabin and was excited to see the Kawasaki license but I don’t think it was a selling point for most people.

The game featured a few different modes of play. Championship was a series of races where you competed to finish 1st in a circuit. Time Trials had you zipping around the course alone in an attempt to set personal record times. Stunt mode allowed the player to ride navigate a course with ramps and other obstacles set up encouraging the player to pull off some eye popping stunts while passing through rings. Lastly was the 2 player option in which two players would race head to head in split screen mode. 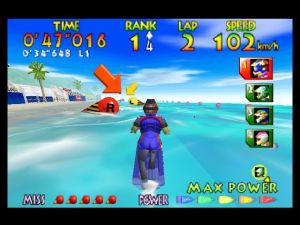 One of the cool things about the game was that you could modify the names of the racers. There were 4 different racers with different attributes that affected how their craft would handle on the waves and they had names like A. Stewart and M. Jeter. I promptly changed mine to names like F. Atass and B. Iotch. Adolescent game players everywhere rejoiced at this feature. When my friends saw these names I tried hard to convince them that these were the default settings.

There were 8 unique tracks plus Dolphin Park to ride around in, and the reverse mode allowed you to play all the tracks backwards. The waves looked realistic and the physics were very impressive and even feel spot on today. As stated before, the 4 different racers have different weights and attributes that cause them to handle differently on the waves. The music and sound were pretty good for an N64 title. Voice samples were used throughout the game leading buyers of the N64 to believe that the console would be up to par with competing game consoles in the sound department. Although the N64 was capable of CD quality sound, memory constraints from using cartridges forced developers to use midi samples or highly compressed audio in their games. While PlayStation and Sega Saturn had full CD soundtracks for many of their games, N64 users were left with audio that sometimes seemed to be eclipsed by the SNES.

Gameplay itself was very solid. Every race featured your selected character against three other opponents taking laps around a detailed course with realistic water physics. The waves looked and reacted realistically and the water craft were affected by the waves and the angles you hit them at. While navigating the course you needed to steer to the correct side of several buoys. When you passed a buoy on the correct side your speed would increase each time through the first five buoys at which point you reach maximum power. If you steered to the incorrect side your power meter would reset. Five missed buoys on a course and you were disqualified from the race. The courses were interesting enough to look at although I wouldn’t say they were particularly memorable. The graphics were very impressive for 1996 though and they still look solid today.

All told this was a well done racer and a pretty good game for the Nintendo 64. With sales of over 2 million units world wide this game was unquestionably a hit. The problem with this game, and all racing games fundamentally is that its over too quickly. Each level is roughly 3 to 4 minutes long and there are only 8 tracks. Play for a few days and you master the game. Considering that N64 games typically retailed for $60 at release, this game would have been better rented than owned.

Nintendo 64 was also home to several all time classics, and although this is a good game there is nothing about it that really stands out as particularly memorable. In my case the game ended up being less memorable than the story behind it. I will always remember this as the game I purchased because Goldeneye was sold out. In essence that is the legacy of this game. It was a solid play in between games like Super Mario 64, Mario Kart 64, Goldeneye, Ocarina of Time, and numerous other titles that you would rather play or back in the day that you were waiting to get.