The Fourth of July was always a special holiday for me as a child. After all, it was a holiday in which you were encouraged to blow things up. To a kid it was a dream come true. In addition to the destruction and the fire the holiday occurred in the middle of the summer. Typically you had been out of school for about a month and afterward you still had roughly two carefree months of summer vacation left. Those worry free summer days are a feeling that simply cannot be replicated in adulthood until retirement. Now when someone asks me “how is your summer going?” I find the question to be absurd. It’s going just like every other season except with more sweating. Summer certainly loses its luster once you enter the workforce, but in those days it was an opportunity to actually be yourself.

Going to buy fireworks was like sifting through an Arab traders market and trying to distinguish between the genuine goods and the hustlers. Consumers were bombarded with signs encouraging them to purchase in bulk. Buy one get 4 free! Buy 1 get ten free! How could you go wrong with deals like that? Unfortunately most of those large bulk BOGO deals were for fireworks that left the pyrotechnic largely unsatisfied. In this post I hope to take you back down memory lane and rekindle your Fourth of July memories as to which fireworks left you craving more and which ones were duds.

These were always among the first kinds of fireworks parents would let their kids play with. Reserved mainly for the 4 to 6 crowd I remember picking boxes of these up at 4 for a dollar and having a blast with them. Simply throw the little bag on the ground and it explodes making a small “pop”. I used to affix several boxes of these to a belt and run around the yard pretending to be Batman. With the boxes comprising my utility belt I would pull out handfuls of these and throw them at people’s feet. Despite being marketed for a younger audience these weren’t bad for what they were. If someone isn’t expecting it you can really startle them by throwing some Snap N’ Pops in their direction. Considering the low cost I’d consider them worthwhile for a few minutes of cheap fun.

These were also among the first types of firework a child would get to use themselves. Light the tip of the stick on fire and watch the sparks shoot out. Some were of better quality than others and they are great for kids who want to be a part of the action, but other than that there isn’t much to them. They usually don’t last very long and the effect is rather simple. Some come in colors and some just shoot plain white sparks but none of them are very exciting if you are over the age of 8 or 9.

Smoke bombs were simple but fun to play with. Light the fuse and the device begins putting out copious amounts of thick smoke. Some come in colors, others emit plain grey smoke. Despite their simplicity they are surprisingly versatile. When phone booths still existed, tossing a smoke bomb into one was a great way to illicit some neighborhood havoc. Have a neighbor that stiffed you on Halloween? Toss one of these in his open car window. The possibilities are endless and with a low price point these are certainly worth buying.

Few fireworks were so enticing to a kid. Blast these into the air and a soldier with a parachute comes cascading back to earth. Wow! Not only did you have the excitement of a firework, you could watch a parachute soldier come sailing back down providing a toy! Unfortunately the execution of these rarely worked as advertised. More often than not the parachute would get tangled and the soldier would just drop. Sometimes the parachute would catch on fire. When they actually did work, the soldier would land on a neighbor’s roof robbing you of the chance to collect the toy. In the end these were always a disappointment. Spend your money elsewhere. 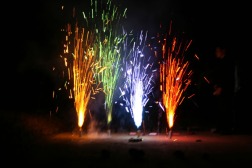 Light a cone on fire and watch a fountain of sparks! Fountains were always a mixed bag. Generally the effect was pretty decent but often they would come to an end much too soon. Some of the pricier fountains are very visually appealing and continuously emit sparks for several minutes straight. The cheap ones fizzle out quickly and often malfunction. With fountains you get what you pay for so skip over the cheap ones and splurge on something that will leave you satisfied.

This wraps up part one of our fireworks breakdown. Check back later for part two of this Fourth of July extravaganza!