Welcome back faithful readers! In my previous post I discussed some of the common fireworks on the market both today and yesteryear and whether or not they are worth buying. No Fourth of July celebration is complete without at least a few explosions or shenanigans. Today we will delve a little deeper into the arsenals and continue making suggestions on what to buy and what to avoid! 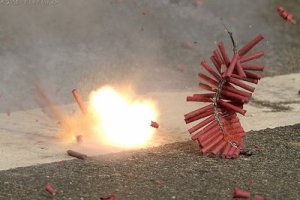 They don’t get much more basic than this. Light the central fuse and set off a chain of small explosions or take them apart and blow them up one by one. Firecrackers are inexpensive but loud. One of my favorite things to do with a pack of firecrackers was light the pack and toss it into a storm sewer. The echo effect throughout the street was fantastic. These are loud alone but put them someplace that amplifies their fracas and you can really irritate your elderly neighbors. Firecrackers are also the first type of firework that got me into some semblance of trouble. A friend and I found several packages of them in a kitchen drawer one summer and started lighting them off around the yard. Of course one of those elderly neighbors I mentioned above didn’t appreciate it and since it was nowhere near the 4th of July they called the police on us. When two troopers rang our doorbell I was banned from using anymore of these again except on the 4th of July itself. Due to their cheap price and loud clatter firecrackers are always worth a purchase.

Packaging sold this rubbish. Light the fuse on a small pellet and watch it grow into a snake! The box always made it look like these things were going to turn into some kind of an anaconda that would strike fear into the hearts of all who beheld their glory. Instead they would invariably wind up looking like a piece of cat shit on fire. Nothing in the world of fireworks was more disappointing than the snake. Even as a kid I preferred to throw the box away after lighting one of these rather than waste my time watching the rest of them expand into mounds of crap. Avoid these at all costs. 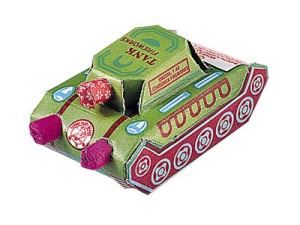 The concept of these always seemed so cool. When the fuse was lit the tank would traverse the terrain firing it’s payload into the air! What young child could resist the temptation of a traveling tank that really fired? In reality these things almost never worked. Rather than roll they might skid around the ground for a bit before tipping over and spinning in a small circle at which point they would catch on fire. In my entire life I believe I’ve only seen one of these work properly, and even then it was underwhelming. Don’t blow your money on these military blunders. 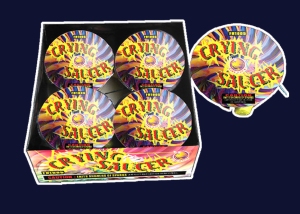 These came in many shapes and forms but the idea was always the same. When lit the object would spin rapidly and then soar into the air. Some designs worked better than others. A properly functioning flying saucer would zip about spraying multi-colored sparks below. One year a companion and I lit one of these and after traveling 15 or so feet up and forwards it reversed direction and came back towards us. We began running and the flying saucer followed, mirroring our movements until it burned out. I swear that thing was intelligent. I’ve never had another experience like that since but it was enough to sell me on these for life. Flying Saucers are always enjoyable and their erratic movement can provide a lot of fun with spectators.

Simple but humor filled. Wait until the setting is pitch black and then light one of these suckers. A series of flashes begin to emanate from the pellet blinding every spectator. These things are extremely bright and the strobe effect is fantastic. Remember that old camera with the flash cubes your grandmother would use on holidays that was so bright you could see the dot from the flash in your vision for several minutes afterward? That’s how bright these are. If you want to annoy the crowd that’s gathered to watch you shoot fireworks, these are the perfect way to do so.

This concludes part 2 of our Fourth of July blow out! Be sure to check back and read the exciting finale!