For a brief period of time in the early 1990s, “Where’s Waldo?” was ubiquitous. At the height of its popularity, “Where’s Waldo?” had a series of books, toys, and even a Saturday morning cartoon. If you were a child during the early 90s, you knew what Waldo looked like, even if you never picked up one of the books. Like every other successful property, it only made sense that a video game wasn’t that far behind.

The premise of Illustrator Martin Handford’s books was simple. In a series of page-spanning pictures, you had to find the glasses wearing, red and white striped Waldo in various locations among a crowd of people. The first book, “Where’s Waldo?” (Called “Where’s Wally?” in the UK), included different locations such as a beach, ski slope, and sports stadium. That seems like a great, unlimited premise for a video game, doesn’t it?

Well, this video game certainly lives down to that description. In my, and many others’ estimation, “Where’s Waldo?” is one of the very worst NES games. I received it as a birthday present and still wanted my money back. The main problem with this game is it is insultingly short and easy. No game should be able to be beaten in 10 minutes, and yet, here we are. This game really shows a lack of effort on developer THQ’s part, as if they could put the bare minimum of work into it and it will sell because of the name. Well, they were right, but it still sucks.

There are eight stages to the game, the majority of which are prototypical “find Waldo” screens, while the rest are pointless mini-games. You can choose the difficulty levels of easy, medium, or hard. The first sign that something is seriously wrong is the map screen where you see all the stages and watch in agony as Waldo slowly walks to the next stage while annoying music plays. When you get to the first stage, “The Train Station,” the horror truly begins. 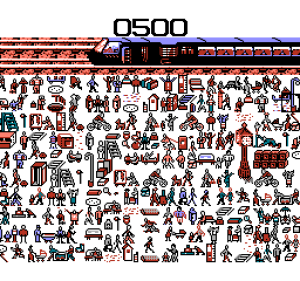 Look at the excellent graphics! It’s not a blurry, pixelated mess at all! On the screen it’s hard to tell Waldo apart from anyone because there are hardly any details at all. You pretty much have to guess by color. You are on a timer when you are doing this, and if you guess wrong, the timer jumps down.

One of the best aspect of the Waldo books are the illustrations. Look at this picture: 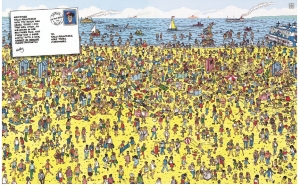 The difference between the books and the game is night and day. In the book, you can tell details, and get faked out by the use of the red and white stripes. When you compare that to the NES version, all detail is gone. It is hard to tell shapeless masses apart. The best you can do is make an educated guess by spotting the red and white stripes. Why did they even bother to make this game when that was the best they could do?

The second level, “Forest” is more of the same, but when you get to the third level, “The Cave,” things are different. For some reason, Waldo has decided to walk through a dark cave. Since everything is pitch black, you are pretty much in the dark in this level. Every so often, Waldo pops out of the darkness to give you an idea of the area he is in. Once that happens, Waldo is incredibly easy to find. 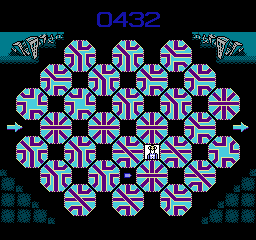 If you can manage the Herculean task of making it past the other “find Waldo” levels, you get to another mini-game, “The Subway” This is another easy level, in which you work your way though a maze to get Waldo’s glasses, and then Waldo himself. What these mini-games prove is that even the developers knew that the “find Waldo” sections were monotonous and needed to be broken up, but they didn’t bother to come up with anything interesting to spice the game up. 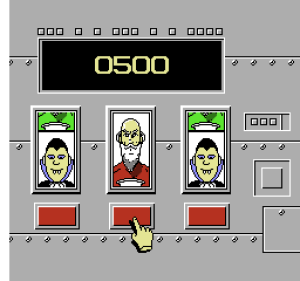 The final stage is the Launch Pad, and it lives up to the difficulty of the rest of the game. You have to match 3 images of Waldo on a slot machine. Once you complete this impossible feat, Waldo goes to the moon. Yes. You read correctly. That is the mission of the game: to get Waldo to the moon. And guess what? That’s where the game ENDS. Yes, the mythology of Waldo wanting to go to the moon that was introduced in the books, comes to fruition here. 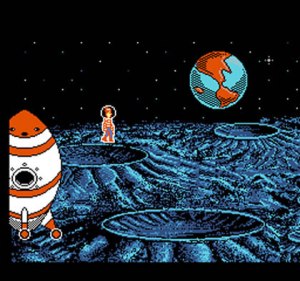 Like a lot of Nintendo games, they didn’t really think of an ending, it just stops. It is even more exaggerated here, because the game is so short and it feels like it shouldn’t be over. It is hard to put into words how bad this game is. It barely even qualifies as a game. Even me, someone who didn’t beat a lot of games, finished it quickly and easily. When it was done, I put it away, never to play it again.

There are really no pluses to this game, it is the worst Nintendo game I ever played. It also reveals the problems of Waldo in general: there is no replay value. Once you find Waldo, any excitement you have about it is over. There is no story. There is nothing left to think about or re-evaluate. At least the books have good illustrations that you can find interesting little details in. There is no reason to play Where’s Waldo for NES again after the initial 10 minutes you spend beating it. What a waste.