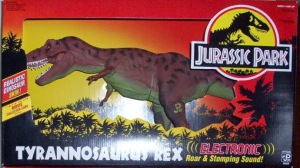 As a 9 year old in 1993, I was the correct age for Jurassic Park. When you’re that age, anything involving dinosaurs is cool. The idea that millions of years ago, these awesome looking animals roamed the earth was mind-blowing to a child. So when word first got out that Steven Spielberg was making a movie about dinosaurs using the latest in special effects, I was hooked. I was there on opening night, and my mind was truly blown. These were dinosaurs far away from the normal stop motion animation of movies like King Kong. The effects were completely believable and still hold up tremendously over 20 years later, putting even a lot of current movies to shame.

Like any cool movie at the time, there was an action figure line. This line had an advantage that the other toy lines didn’t – dinosaurs. The dinosaurs were the bread and butter of this line and elevated it well above most of the other toy lines. Who cares that the human characters were an afterthought and didn’t look like the actors at all? Seriously, they didn’t bother trying to make them resemble the actors at all. They put most of their attention on the dinosaurs, as they should. The human toys were merely there to get attacked by the dinosaur toys.

Up until this point, the existing dinosaur toys weren’t that impressive. The ones I remember having before Jurassic Park were hard plastic, with generic sculpts. When these figures hit, they were completely unique. Instead of hard plastic, the figures had rubbery “skin” that felt different from any other figure. The sculpting was great in the way the dinosaurs actually matched how they looked in the movie. A lot of the figures even had “dino-damage” where a section of skin could be pulled off, showing the muscle and bone beneath.

The initial line consisted of Raptors, Dilophosaurus, and a large Stegosaurus and Triceratops, even though the Triceratops is only seen lying down sick in the movie, and the Stegosaurus never appears. The crown jewel of this line was the Tyrannosaurus Rex. It’s no surprise that the T-Rex is the one I wanted most of all. It seems like the T-Rex is everyone’s favorite dinosaur when they’re a kid. Spielberg and company obviously knew who the star of the movie was going to be while filming, when they added in the T-Rex taking out the Raptors in the finale while they were in the middle of production. If you wanted one toy from this line, surely this would be the one:

The T-Rex is the biggest of the line, and is in scale with the human figures. The sculpt of the figure is great, matching the T-Rex’s appearance in the movie. The “skin” makes the figure look more realistic, with the color being more red, rather than the brown color of the T-Rex in the movie. When you press in the side of the Rex, its jaws open and roars. You couldn’t really get much movement out of him, because it, like all T-Rex’s, have those incredibly small arms.

This figure became the centerpiece of my collection. For a while, I took it with me wherever I went. I would display it in prominent positions around the house. It remains the best toy I remember had.

The Jurassic Park line was the peak of the series, it was a steady decline from there. The Lost World toy line didn’t quite measure up, but when Jurassic Park 3 came around, it seemed like they weren’t trying anymore. The dinos were downsized to be in regular action figure packaging, and when they did bigger scale dinos, they appeared cheap looking. They didn’t even bother to have skin to place over the dino-damage anymore, they apparently were zombie dinosaurs! 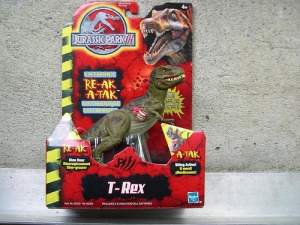 The original Jurassic Park line is a milestone. In the days before Star Wars toys returned to prominence, the Jurassic Park figures stood tall. Even through all the years, the line has stuck around in one form or another. I keep waiting for another T-Rex to usurp this figure, but it hasn’t happened yet.