Way back in 1989 a company named Larami changed the landscape of backyard water wars forever when they released a brand of high powered high accuracy water guns known collectively as Super Soakers.  Up until that point water pistols were inaccurate, low powered, had poor range, and barely spritzed their target with a few droplets of H2O.  Laramie changed all of that when they released the air powered Super Soaker rifles in 1991 and filled our summer’s with much moistening mischief and filled our hearts with summertime stories.

Larami toys certainly did not invent the concept or the industry.  Water guns were widely available for several years before the proliferation of Super Soaker’s into the market place.  Larami simply perfected the product.  Up until the Super Soaker hit shelves, most of us had a handful of water pistols languishing around the house that we would break out every so often and then forget about within minutes.  The problems were multiple.  First was filling the damn things.  Every water pistol I ever owned required you to pull a tiny plug out of the back of the gun and attempt to direct water into a hole about 1/4″ wide.  If the water pressure was too high it would simply deflect off of the gun and run straight down the drain.  That stupid plug had a small plastic tie that stayed inside of the hole  preventing the plug from getting lost.  Unfortunately it also made it difficult to direct the water into the reservoir.  One had to either turn the water down to a small trickle and wait endlessly as the gun filled or submerge the pistol into a bucket.  Afterward the gun would inevitably leak all around the plug or out of the seams where the plastic molds met.  It wasn’t uncommon to have water running down your hands and arms as the gun would lose it’s ammunition all over the ground.  With the squeeze of a trigger water would be pumped through a straw out of the barrel in a largely unpredictable trajectory with a short range.  If you did hit your target, the result was a rather disappointing spritz comparable to a spray bottle.

Super Soaker’s handled things differently.  First, they were filled by removing a wide mouthed tank from the rifle.  The hole was roughly the size of a 2 liter soda bottle opening making them far easier to load.  Once filled the user would screw the reservoir tank back onto the gun and begin pumping a handle that sent the water into a second pressurized tank.  When the trigger is squeezed a valve would open allowing the air pressure to propel the water out of the barrel completely saturating the target.  Super Soaker’s were not a misnomer.  These guns literally did soak the target.

A variety of Super Soaker models were available on the market catering to different needs and budgets.  The Super Soaker 50 was the “standard issue” rifle of many kids.  Large enough to fulfill the needs of most users but small enough to still transport relatively easily the Super Soaker 50 was probably the most popular and widespread of all models.  Aiding sales was the fact that it was a mid range price so parents who did not want to spend a lot of money on a water gun would pick up the Super Soaker 50 for their child.  Advertised as blasting water up to 50 feet this gun did a very adequate job. 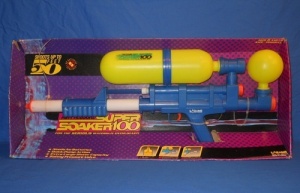 Next in the pecking order was the Super Soaker 100.  This is when things started to get serious.  Advertised as having a range of up to fifty feet as well the Super Soaker 100 was roughly twice as large as the Super Soaker 50, and also nearly twice the price.  It featured a separate reservoir shaped like a ball on the back of the rifle which would fill with pressurized water when pumped.  Intimidating looking and impressive to hold the Super Soaker 100 was more of a water cannon than a water gun.  Unfortunately they were not particularly durable and the barrel would often snap when pumping.  As a result not many Super Soaker 100’s lived through the 1990’s. The Super Soaker 100 was the weapon in my arsenal, having received it as a birthday present in 1993. I have many fond memories of shooting passing cars and spraying bird shit off of the garage door with it, which was one of my summer chores.

After the Super Soaker 100 was the mighty and impressive Super Soaker 200. I never knew anyone that owned the 200 model but I did see plenty of advertisements for it when watching Tiny Toon Adventures after school. The primary upgrade from the 100 model was in capacity. Rather than one tank the SS200 housed two water tanks and increased the size of the pressurized reservoir. Since this beast was heavy when full it included a shoulder strap and a carrying handle.

The arms race did not end at the Super Soaker 200. In an effort to further up the ante and allow for maximum drenching potential Larami released the seldom seen Super Soaker 300. This model featured three pressurized water tanks mounted on top of the rifle. Since increasing the water capacity any more would make the gun prohibitively heavy in the hands of children Larami opted to fuel the 300 model gun with a water tank worn as a backpack. A tube connected to the bottom of the tank led to the rifle housing and fed the pressurized reservoirs when pumped. Rather than squeezing a trigger the gun was fired by pulling back on a lever mounted to the front of the barrel. Any kid running around wearing this would have looked like they were toasting Japanese with a flamethrower on some remote Pacific island. Anyone wearing this weapon of mass destruction would have been the equivalent to an end boss in the backyard water wars.

Larami did not ignore the small arms department in their efforts to put bigger and more powerful weaponry into the hands of children. Clad in orange the Super Soaker 30 was tantamount to a water version of a model 1911 handgun. I don’t recall it being immensely popular as a child but I did know a few people that received them as small presents and carried them around as a side arm to compliment their larger Super Soaker rifles. The other benefit of the 30 was that it was small enough to shoot indoors without fear of saturating the surroundings, but still packed enough punch to sufficiently douse the target.

Lowest on the totem pole was the Super Soaker 25. A good stocking stuffer it was only a small step above a “regular” water pistol. The pump was on the bottom of the handle making it awkward to charge while in the heat of a fire fight. Quite honestly this was the poor man’s Super Soaker. If you had a 30 or higher model this thing never saw any use.

Larami’s quest to encourage consumers to part with their cash did not end at just the guns themselves. Another popular Super Soaker product was the X.T.C. for the Super Soaker 50. Known as the eXtra Tank Carrier it was a belt and two additional tanks so that the water warrior could swap out empty tanks for his Super Soaker 50 on the go. Although not a must have accessory it certainly was handy and it made the kid wielding the tools look terrifying.

All encompassing toy giant Hasbro bought out Larami in the mid 90’s and put their own spin on the Super Soaker line of products. Although I believe they are still manufactured today they certainly aren’t as present in popular culture as they were in the early 90’s. Regardless of their existing prestige or lack thereof, to kids back in those days they were must own status symbols that provided a myriad of memories as well.