NES games were tough to beat. Even to this day there’s a term in the gaming community called “Nintendo Hard” to describe a particularly difficult game. Sometimes the game was challenging but fair such as Mike Tyson’s Punch-Out. Other times the game was prohibitively lengthy without a save or password feature as is the case with Super Mario Bros. 3. Then of course you have the games that threw a bunch of cheap deaths or unfair memorization at you like Battletoads. No matter the cause of difficulty, us kids needed help to beat these games. Our skills weren’t quite fine tuned yet and the odds were severely against us.

Galoob stepped in to aid gamers in their quest to complete these near impossible electronic torture devices in 1990 with the Game Genie Video Game Enhancer. Developed by Codemasters the Game Genie was a device that plugged into an NES cartridge and allowed the user to temporarily modify the data contained therein. By entering assorted codes the user was able to cheat by manipulating different rules or aspects of the game. For instance, the user could often input a code for unlimited lives, invincibility, the ability to skip levels, unlimited ammo, higher jumping, and other useful modifications. The original Game Genie only allowed for input of up to three codes. 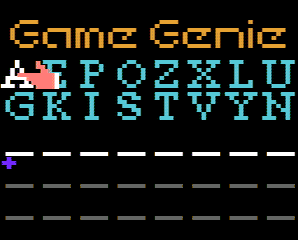 The original NES model Game Genie was a somewhat odd looking device due to the quirky design of the toaster oven NES. Located on each end of the peripheral were connector pins that locked onto the cartridge and passed through to the internal cartridge receiver. Painted gold and emblazoned with a blue and red label the top of the Game Genie also had a big black piece of plastic to keep the user from jamming the device too deep into the system. It almost looked like a thong strapped to a harmonica but it worked.

Without the Game Genie there were some games that most of us would never have seen the endings to otherwise. So in those crazy pre-internet days how did we find codes for our favorite games? Galoob released a codebook with the device that was packed with passwords for the most popular NES games and even some lesser known titles. Since new games were still being released for the system Galoob offered a paid subscription service which mailed new codebooks out to Game Genie users quarterly. These books contained new codes to previously released games as well as codes for brand new games. Instruction manuals for NES games aren’t particularly common as many kids just tossed them out along with the game boxes. Booklets for the Game Genie are much easier to find by comparison however because the device was useless without access to the codes they contained. 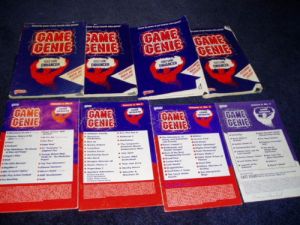 I never owned a Game Genie as a child but I did borrow one from a friend of mine for a few weeks during the summer of 1993. Using the device I was finally able to see the ending to Ikari Warriors, fight Super Macho Man and Mr. Dream in Punch-Out, and jump over the flag pole in Super Mario Bros. Borrowing the Game Genie revitalized my interest in the NES over that summer. My new Sega Genesis was put on the side burner for a few weeks while I rediscovered and finally overcame the challenge of several NES classics. It was a superb device and something I definitely would have liked to pick up. For some strange reason I never did purchase a unit for any console until the mid 2000’s when I finally splurged on a used one so that I could see the ending of Teenage Mutant Ninja Turtles again.

Game Genie wasn’t all roses and sunshine however. It did adversely effect the NES console with repeated use by bending the pins inside of the console’s ZIF socket. Over time the pins would become malformed due to the increased pressure and render games unplayable without using the device. Today new 72 pin connectors are readily available on the secondary market so repair of these consoles is cheap and easy. The device isn’t able to be used on top loading NES consoles as a result of an intentional change in the cartridge slot’s design by Nintendo. Galoob did release special adapter’s for these units but they are quite hard to find as the top loading NES was not released until very late in the NES lifespan.

Technical issues were not the only complications of the Game Genie. Shortly after release Nintendo sued Galoob claiming that the Game Genie’s manipulation of code created derivative works and thus violated copyright law. While the matter was being resolved Galoob was prohibited from selling more Game Genie units in the United States. Eventually Galoob did win the case with the judge declaring that manipulation of game code does not create a derivative work. Since a user purchased the game they have fair access to alter the code with the judge comparing using a Game Genie to fast forwarding a movie or skipping pages in a book.

As the 8 bit era gave way to 16 bit consoles Galoob followed suit by releasing Game Genie devices for the Super Nintendo and Sega Genesis. While similar in concept and use to the original NES Game Genie, they featured an improved user interface as well as the ability to input more codes than the NES version allowed. Game Genie units for Sega Genesis were also used to play import games as the “lockout” of these consoles were typically just different shaped cartridges. Galoob didn’t just stop at the next generation consoles though. The cheat devices were also released for the Game Boy and Game Gear before Galoob ultimately discontinued the product line. 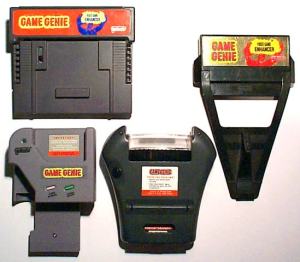 Despite not having a presence on any game console released after the 16 bit era the Game Genie name is still legendary in the gaming community. Most emulators of vintage consoles include the option to input Game Genie codes. To this day there is still an active community of game enthusiasts that attempt to find new codes for these 20 to 30 year old games. Sometimes gamers will request a code on an internet forum to accomplish a specific goal and people that know how to reverse engineer the game examine the programing in an attempt to produce a code that will deliver the intended effect. The Game Genie is also still quite popular on the secondary market as retro gaming has experienced a boom period lately. Adults wanting to see the endings to the games they couldn’t conquer as children are seeking out used Game Genies so that they can relive their gaming glory years.