Unlike many other people, my first exposure to Roddy Piper was not him in the WWF. I first saw him when I saw the 80s cult classic “They Live”. I remember really loving it, even if I didn’t quite understand it since the movie itself is so “out there” compared to many sci-fi films I’d seen. Given Roddy Piper’s recent passing and Eric’s excellent article, I decided to put in the Blu Ray and watch it for the first time in years.

Horror director John Carpenter was at the Pontiac Silverdome for WrestleMania III, where he first met Roddy Piper. He decided to cast Piper in the movie shortly afterward, thinking that “Unlike most Hollywood actors, Roddy has life written all over him.” Piper is the everyman star of the movie, the character we follow from beginning to end. We discover the crazy events of the film along with him. 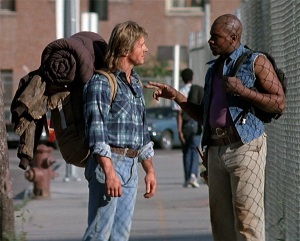 Roddy Piper plays a homeless drifter who isn’t named in the movie, but is listed as “Nada” in the credits. He arrives in Los Angeles looking for a job, finding one on a construction crew. A friendly coworker, Frank, leads him to a homeless shantytown where he could stay. He notices that strange things are happening in the area, broadcasts on television are interrupted by a bearded man warning people that “they” are in control.

Nada sees people coming in and out from a nearby church. Sneaking in, he notices that the sound of choir coming from the church is actually a recording. There are boxes everywhere, and a secret meeting is occurring behind a wall in the church. He is caught by a blind preacher, who freaks him out as he runs from the church. While outside, he notices a helicopter monitoring the church from above.

That night, the police tear through the shantytown and take out the church. Nada survives, and in the morning, goes back into the church to find it empty except for a single cardboard box. He quickly grabs it and takes it outside. Ripping it open, he finds it full of sunglasses. Frustrated, he hides the box, but out of curiosity, takes one pair and puts it on as he walks through Los Angeles. 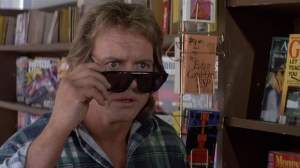 I’ll be honest, the first 35 minutes are pretty slow. Piper is mostly silent, just walking through the city, reacting to things but not saying too much. All of this changes when he first puts on the sunglasses, then he, and the movie, get awesome. When he puts on the sunglasses, he sees the world as it really is, which is in black and white, for some reason. A lot of the people walking around are revealed to be ghoulish looking aliens.

The aliens are in positions of power, and use signals to beam messages into our minds at all times. This is a very different kind of alien invasion movie. They are already here, and have already taken over. In that sense it is closer to Invasion of the Body Snatchers, where it’s more hopeless since the enemy is everywhere, and you don’t know who is a collaborator. Nada does what any sane person would do – go around shooting the aliens. He takes out a few police officers and then goes into a bank uttering the greatest line in the movie, a line that you know even if you’ve never seen the movie. “I have come here to chew bubblegum and kick ass, and I’m all out of bubblegum.” This is one of the lines that Piper came up with himself to use in wrestling promos. He gave a list to Carpenter, who picked this one and added it to the screenplay.

The movie hits its zenith with the fight scene between Nada and Frank. Nada wants Frank to wear the sunglasses and see what the world is really like. Frank is afraid of Nada since he went on a murder spree and doesn’t want to wear the glasses. They fight. For a full six minutes of screen time. It is pretty cool to see an actual fight scene, since so many of today’s fight scenes are short and quickly edited. Here it goes on and on in a way that it would absolutely NOT in any modern movie. If there is one scene you have to see from the movie, it is this one.

I would recommend this movie to those who like Roddy Piper or cult films. It is definitely not a subtle movie, but it so over the top that it is comical. There is some good action if you can make it through the first half hour. It is really funny at times, especially Piper’s reactions to the events in the latter half. The “romance” is pretty worthless and could have been lifted easily with no problems, but the movie is so short that it doesn’t really have time to dwell on any of the problems. 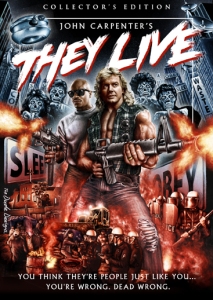 The 2012 produced Shout Factory Blu Ray is excellent. Not only do you get the movie with great picture quality, there are plenty of extra features, including a commentary with Roddy Piper and John Carpenter. Shout Factory does a great job of taking these cult films and putting time and energy into their releases and actually including special features, in an era where many studios don’t bother. Not to mention the artwork that they use for the cover.

While being very much a product of its time, “They Live” still packs a punch today. Today a movie like this would never be made. The fact that a movie this unabashedly goofy starring a professional wrestler was put into theaters is something that still surprises me to this day. It is a good reminder of what a fun actor Roddy Piper is, and what he could do with the right material. IF you need a reminder of Roddy Piper at his best, this is one of the best ways to remember him.