It is difficult for me to believe it.  On this day, August 24, 1995 Microsoft officially released it’s pivotal operating system Windows 95.  My how time flies.  I remember the hype and buzz surrounding the release of Windows 95 like it was yesterday and now it has been exactly TWENTY YEARS since the operating system hit store shelves.  Although there has been a lot of excitement this year surrounding the unveiling of Windows 10, it pales in comparison to the frenzy of the Windows 95 release.

Codenamed Chicago, Windows 95 began development in 1992 with the goal of releasing an operating system that could run 32 bit applications while still being capable of being used on low end hardware.  Windows 95 was a giant leap above the previously released Windows 3.1 and it introduced a lot of elements that are still in use today.  For instance, the ubiquitous Start button (the same Start button that was removed from Windows 8 that created controversy) made its very first appearance in Windows 95.  In fact, Microsoft paid the Rolling Stones a considerable sum to use their 1981 single “Start Me Up”as part of their advertising campaign for the release of the system.  This of course was an ode to the “new” Start button feature. 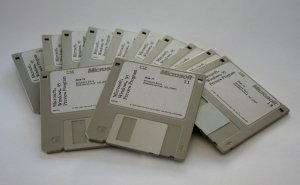 Before wide scale release Microsoft made a demo version of the new OS available for purchase.  For $19.95 users were sent a set of floppy disks that would install a preview of Windows 95, the Microsoft Network (MSN), and assorted media.  The preview version of the OS would expire in November of 1995 at which point the user would have to pay for the final released version.  Yes that’s right.  It’s hard to believe now but 20 years ago people were so excited about the upcoming Windows OS that they actually PAID nearly 20 bucks for a pre-release demo version just so they could see it early.

Microsoft spent nearly $300 million in an extensive advertising campaign which was so successful that people actually waited in line outside of computer stores around the world so that they could pick up a copy at midnight. If you were to go into a CompUSA or Best Buy in those days your eyes were assaulted by various Windows 95 posters, signs, banners, and oversized novelty boxes promoting the software.  Upon release the Empire State Building in New York was illuminated in the Microsoft Windows colors of red, blue, yellow, and green while an over 300 foot banner was hung from the CN Tower in Toronto Ontario to usher in the beginning of the Windows 95 era.

At the time the only computer I owned was an older IBM PS/1 with a 30MB hard drive that was completely incapable of running Windows 95.  Coupled with the fact that I wasn’t even a computer kid to begin with you would imagine that all of this hype would simply have passed me over.  That was not the case however.  So extensive was Microsoft’s advertising campaign that even I was sucked into the euphoria of the new OS.  Bombarded with messages permeating every avenue of popular culture I was convinced that Windows 95 was the single greatest thing to ever happen in the computing world.  Jay Leno was talking about the software.  Rush Limbaugh was praising the new graphical user interface.  Even Matthew Perry and Jennifer Aniston of the new hit TV sitcom Friends got in on the action by playing a part in a 30 minute promotional video showcasing the features of Windows 95.

It is important to note that up to this time most people still only used computers at work for laborious tasks.  Sure there were always some enthusiasts around the nation that owned a computer used for the purpose of entertainment but the hardware was still cost prohibitive to most and the learning curve for using a computer was still very steep.  The layman was intimidated by the DOS operating system which was still the most common OS used at the time, and Windows 3.1 wasn’t exactly intuitive for non-techie types.  Windows 95 changed the landscape of the computer industry and ushered in the casual user demographic.  It’s easy to take for granted now as computers in homes are the norm, but Windows 95 was really the genesis of this phenomenon.

In addition to the Start Button, Windows 95 also introduced the task bar, the system tray, Windows Explorer, the desktop metaphor, and the now nostalgic Microsoft Sound.  It also allowed for long file names (up to 256 characters) and 32 bit applications on the technical side.  More importantly, most people of my generation were introduced to CD-ROM media, instant messaging, and of course the internet on Windows 95 computers.  Although the internet certainly existed well before Windows 95 was released, it was during the lifespan of the OS that it gained popularity by leaps and bounds.  Fueled by AOL diskettes delivered to our door steps most people my age took our first steps into cyberspace on Windows 95 machines.

Looking back it is somewhat amusing to note that Windows 95 was released on both CD-ROM and floppy disk.  Yes, in the early days of its release CD-ROM was still not a standard peripheral on a PC as some systems were still only equipped with 3.5″ floppy drives.  If you wanted to install Windows 95 using the floppy disk method you had to plod through 13 different disks.  Of course CD-ROM was the preferred method as it required only one CD and it was also loaded with bonus content.  Not only did the CD include music video’s of Weezer’s “Buddy Holly” and Edie Brickell’s “Good Times”, the user was also able to play the now legendary PC game “Hover!”.  Windows 95 truly was the bridge between the way computing used to be and what computing has become since.  It ushered in an entirely new era and took computing away from the workaholics and the “nerds” and introduced it to the masses at large.

I can’t write about Windows 95 without commenting on another particularly nostalgic piece of the experience: the C:\Windows\Media folder.  Navigating into the folder the user would find all sorts of interesting sound clips in the form of MIDI and WAV files.  Most of the WAV files were used in customizing the experience but the MIDI tunes “Canyon” and “Passport” were simply there for the adventurous user to discover.  Many summer afternoons in my youth were carelessly frittered away at my friend’s house listening to passport.mid on his Windows 95 PC simply because it was there. 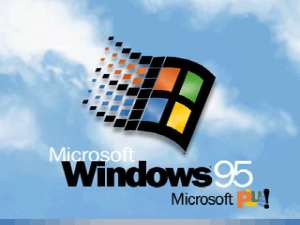 Microsoft also released a CD titled “Microsoft Plus!” for Windows 95 which was loaded with additional desktop themes, games, and media.  Although the desktop themes were kind of cool the killer app for me on the Microsoft Plus! CD was clearly the Space Cadet Pinball game.  Despite it’s simplicity I played it for hours on end.  Of course, no discussion about simple games on Windows 95 would be complete without discussing the bundled Solitaire game which was the killer app for most middle aged users. 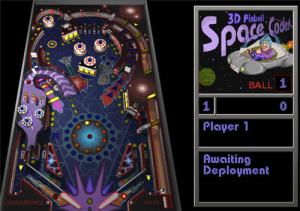 Only 3 years after it’s release Microsoft Windows 95 was replaced by the updated Windows 98 which introduced even more users to the internet and computing as a whole.  In my opinion the Windows 9X era was the most pivotal time in the computer industry as the popularity and growth of home computing was astounding and the explosion in use of the internet began at this time.  Now computers in the home are taken for granted and hopping on the internet is something we all do with so much regularity it is an afterthought.  But it was Windows 95 that began the revolution for most of us 20 years ago and I find myself compelled to pay homage to the OS that began my, and millions of others’ love affair with the world of computer technology.