Wes Craven passed away Sunday after a battle with brain cancer at the age of 76. This is a tremendous loss for the horror community. He is one of the most popular horror directors of all time, along with his contemporary John Carpenter. They both came up in the 1970s, and made horror films throughout the 80s. For a while, he was so popular that the studios would put his name above the title, even if he only produced the movie.

Wes Craven grew up in a strict Baptist household. He was raised by his mother after his father died when he was 4. He was not allowed to watch movies, much less the hard R rated movies he ended up making. I was always struck by how unlike a horror director he looked. He looked more like a college professor than an individual who made messed up horror movies, it turns out he actually was a professor! He taught English at Westminster College in Pennsylvania and was a Humanities Professor at Clarkson College in New York before he decided to become a director.

His filmography was spotty, but when he hit, he hit. There are three films he was most well known for, and each film defined the era of horror they existed in. The Last House on the Left, his first feature film which came out in 1972, is a real tough watch. It is a very gritty and no holds barred movie about a teenage girl who is raped and murdered by a group of thugs, and the subsequent revenge by the girls parents when the gang ends up staying at their house. This is a movie that I watched once, and have no desire to see again. It is really hard to watch because of a combination of the level of violence, and the documentary like camera work. The film generated a huge amount of controversy and put Craven on the map.

A Nightmare on Elm Street is his most famous work, part of the slasher explosion of the 1980s. There’s no need to explain the plot since pretty much everyone knows it, as Freddy Krueger has become a household name. Unlike the inferior sequels that followed, this is purely a horror movie. Freddy is barely seen, and when he is, there are a distinct lack of wisecracks. Like Last House on the Left, although it is not nearly on that level, Craven doesn’t shy away from the violence. Tina’s death, in which she is literally dragged to the ceiling and cut apart is gruesome in the way it is shot and edited. 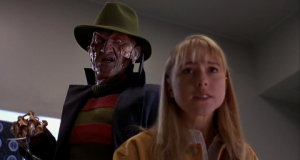 Craven was not pleased with the more comedic direction that the series took after he left, so in 1994, he made Wes Craven’s New Nightmare. It took a very meta approach to the series, taking place in the “real world” where the actors from the original movie played themselves, being stalked by a much scarier Freddy Krueger. The movie took jabs at the laughable nature of what the once scary villain had become. It also took cuts at New Line Cinema, the company who produced all the Freddy movies, including head and founder Robert Shaye playing himself. 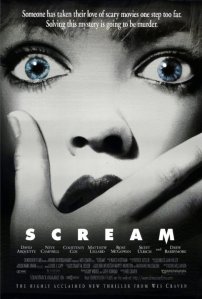 That movies meta nature came into full bloom with “Scream” which is the defining horror movie of the 1990s. In the early 90s, the horror genre was in big trouble. The sequel mania of the 80s died off, and there was nothing to replace it. New horror movies in theaters were few and far between, and those that were released didn’t gross much at the box office. Then came Scream. A horror movie in which all of the characters actually know what was going on because they had watched many horror movies. Kevin Williamson’s script was fantastic, but Craven’s direction brought it home. It wasn’t enough to be funny, it had to be effectively scary.

In spite of, or maybe because of, his upbringing, Craven never shied away from violence. Whereas most directors would cut away from some of the horror, Craven went all-in. In the case of Scream, it helped the movie. Since Scream had a lot of comedy in it, the horror had to be real to keep you invested in the story and characters. When characters are stabbed, we see the blade going in and blood coming out, and hear the sound it makes. We see the characters react to being stabbed. It doesn’t come across as exploitative, it makes it come across as real. When people classify Scream as a comedy, I agree to a point, but I also say you have to treat it as much of a horror as as a comedy. I would not classify a movie with as intense a scene as the opening with Drew Barrymore as just a comedy.

In addition to the movies I covered above, I would recommend The Serpent and the Rainbow, about a man who encounters Voodoo while in Haiti, and Red Eye. Red Eye is not a horror movie, but more of a thriller, which features Rachel McAdams as a passenger on a plane who is threatened by the person sitting next to her. These movies show the range that Wes Craven possessed, from realistic, gritty horror, to fantastical imagery, and comedy.

If Craven’s work can be seen as spotty, who cares? Any director would kill for a movie with the impact of A Nightmare on Elm Street on their resume. Any director who can make a movie like Scream, could get away with a flop like Vampire in Brooklyn. He’s had his highs and lows, but the highs more than make up for the lows. I can only end this tribute with a few quotes from Wes Craven himself on the importance of horror films:

“It’s like boot camp for the psyche. In real life, human beings are packaged in the flimsiest of packages, threatened by real and sometimes horrifying dangers, events like Columbine. But the narrative form puts these fears into a manageable series of events. It gives us a way of thinking rationally about our fears.”