Ralston was known for their licensed cereal brands in the 1980’s and early 1990’s. If there was a property popular with children, a shopper could be pretty certain that Ralston would dump some processed nuggets in a box and slap a logo on it for a quick buck. Ralston-Purina sticks to making pet food and private label brands today. This would be an obvious place to insert a joke about Ralston making dog food as well as cereal, but I remember being particularly fond of their offerings as a kid so I will abstain from tarnishing their legacy. Instead, I will discuss one of their breakfast contributions I enjoyed the most: Batman the Cereal.

As I mentioned in my article about the Toy Biz 1989 Batman Figure, the Nicholson/Keaton film about the Caped Crusader and his evil nemesis the Joker became less a movie and more a phenomenon. Batman permeated every aspect of every day life as a 5 year old in 1989 and the breakfast table was just one of many places where Batman was enjoyed. Ralston was of course no stranger to licensed cereals and was quick to jump on the Batman bandwagon. When sleek black boxes of Batman breakfast foods started showing up on store shelves in late 1989 I was quick to ask my mom for the pleasure of trying it. In those days I was forced to embark on the grocery shopping excursions with my mother and I hated every moment of the endeavor. To placate me mom rewarded me with the cereal. My mom was always a mark for Batman anyway, becoming a fan when the 1966 TV show starring Adam West debuted on ABC (in color) so this was one fad which my mother actually approved of.

Batman cereal itself was not particularly exciting. The boxes of Ralston cereals were smaller than most competing brands, I suspect as a cost saving measure due to the price paid for the licenses. Inside were golden particles shaped like bats. The box described the cereal as having a “natural honey nut flavor”. I can’t vouch for that, but I do remember the cereal tasting almost identical to Cap’n Crunch. Not bad considering I was always a fan of the good Cap’n. 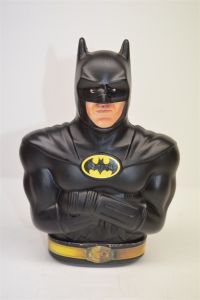 Far more memorable than the cereal itself however were the premiums. The one that caught my eye as a kid, and every other child my age as well, was the Batman coin bank. Shrink wrapped to the outside of every box was a slab of plastic resembling Michael Keaton’s masterful portrayal of the Dark Knight from Tim Burton’s famous film. The bank consisted of a figural portrayal of Batman from the waist up, with his arms folded and stickers fleshing out the details such as the utility belt, bat logo, face, and eyes. Although some of the banks had a cross-eyed appearance, the bank was an amazing cereal prize and was a required possession of all pre-school fans of the franchise. I proudly displayed mine on a bookshelf in my bedroom years after the movie had faded out of the public eye.

In addition to the bank, there was actually a bonus offer included. The back of the bank had a peel off sticker affixed to it which offered a soft glow Batman night light. For the paltry price of $3.00 shipped in the form of cash or money order one could order a night light shaped like the famous bat logo. There was no limit to the quantity ordered but the purchaser did have to wait the dreaded 4 to 6 weeks for delivery. I never sent away for the night light as I wasn’t a pussy, but a friend of mine did get one which he excitedly plugged into his bedroom outlet.

One cereal mail away premium I did participate in was the free comics offer. Late in the life of the cereal a promotion took place which promised free comics. Just pay shipping and handling. Doesn’t that negate the “free” part? Regardless, my mom sent the form and required cash and we waited the 4 to 6 weeks to receive the exclusive 3 comic set the Untold Legend of Batman. The comics were a bit smaller than the standard size but they were well done and didn’t lack any of the expected ink or artwork of a newsstand release. At the time I didn’t understand how to read comics however and couldn’t have cared less about this series. I still own them to this day, but 25 years later have yet to explore the untold legend. Unfortunately Batman in comic form never really appealed to me. The only comic I ever got into was Spider-Man from the 60’s through the 80’s. Maybe I’ll give it another chance someday.

Eventually Batman cereal was replaced by Batman Returns but I never ate any of it. The sequel to the 1989 movie didn’t appeal to me as a kid nearly as much. By that point I had also more or less moved on from licensed cereals to eating the standard breakfast fare. In 1994 Ralston sold out their cereal division to General Mills ending an over 90 year run in the breakfast business. Although they are no longer in the game, those of us who grew up in the 80’s will look back with fondness on their sugary concoctions.