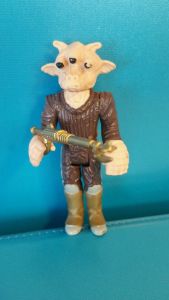 Kenner did a fabulous job with the vintage Star Wars action figure line. One of the great things about the series was that any cool looking alien that spent at least 3 tenths of a second on the screen would be immortalized by Kenner in the form of Chinese produced plastic. Today we’re going to take a look at the vintage Ree-Yees figure.

Ree-Yees was one of the many denizens of Jabba’s Palace in Return of the Jedi. Although he did not play a significant role in the plot of the movie he ended up being one of the more “famous” background aliens. Part of this has to do with his prominent screen time. When I say prominent I mean he was actually in the foreground of a few shots rather than just standing idly near the back of the set. Although he only appeared in about 4 seconds of screen time, that was more than several other characters that received figural representations. Second was the fact that he not only had 3 eyes but he had three eye stalks. EYE STALKS. Cool looking aliens were as much a cornerstone of Star Wars’ popularity with kids as lightsabers and it doesn’t get much cooler than having stalks for eyes.

Another interesting aspect of this figure is that he actually had his name printed on the card. Other aliens were given eccentric depictions of their appearance as names such as Snaggletooth, Hammerhead, Walrus Man, and Squid Head. Not Ree-Yees however. Instead of appearing on cardback as Tri-Eye, Stalk Face, Blinky, or Goat Face, he received the proper recognition. Maybe the marketing team at Kenner were big marks for Ree-Yees? Whatever the case, kids actually got to know the name of this exotic extraterrestrial.

For $2.99 a child received the awesome action figure as well as the “Ree-Yees rifle”. Ree-Yees didn’t have a weapon of any kind on screen so I can only assume that the gun was a unique creation of Kenner’s. Painted in gold the rifle looks like a muffler attached to a piece of galvanized pipe with a butt and a curved handle. Affixed to the tip of the barrel appears to be a bayonet of some sort. In the expanded universe Ree-Yees was a noted drunken fighter so the gun would seem to fit his aggressive personality.

The figure itself is as good a representation as 1980’s Kenner could produce. Although not spot on, the likeness is good enough that he certainly couldn’t be mistaken for anyone else, and the toy is fun and cool to play with. His hands are huge and look like fat bandaged sausages. No wonder this guy was always angry. He was ugly as sin and it must have been difficult for him to text his friends with huge hands like that. Like all Star Wars figures, the articulation is lacking but he fits in all of the vehicles and doesn’t have any glaring omissions or issues of any kind so one would really have to nitpick to complain. Hasbro would of course re-release the character in their Power of the Force 2 line in the 1990’s with a much more accurate likeness but the vintage figure has a certain charm that simply cannot be replicated by any modern toy.

Ree-Yees is a pretty common figure and as such he doesn’t command too much on the secondary market today despite his age. A complete version can be had between $5 and $10 and there are always figures available in plentiful supply. Although not rare or noteworthy in anyway he has always been one of my favorite Star Wars characters and toys simply for his quirky appearance alone.