This changed in 1992, when the news about the “Death of Superman” was released. This was a pretty transparent move by DC Comics to revive slumping sales of Superman comics, but it was definitely successful. When the news went out that Superman was going to die, it got out everywhere. I heard it on the news, and like a lot of America, I was really excited. How could Superman die? What could kill him? What happens next? These were questions that drove me to jump into comics for the first time late in 1992. 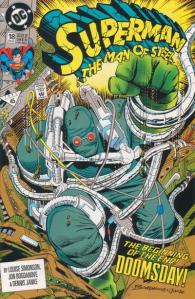 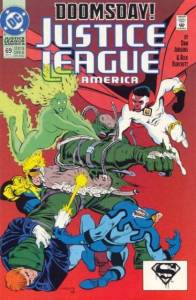 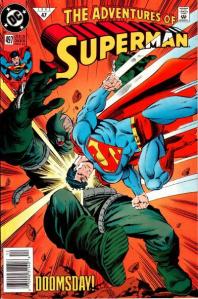 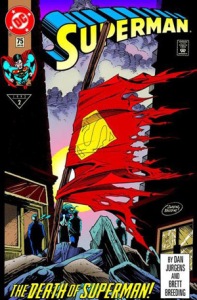 The Death of Superman arc spanned 7 issues across a 2 month span, with one issue coming a week. The means of Superman’s death was a new villain who emerges from the earth, and goes on a mindless, destructive rampage across the United States. I thought it was odd when I was a kid that it wasn’t an established character that was responsible for Superman’s death, but a newly created one. But the mystery of Doomsday just fed into the hype of the series. Keeping him mysterious made people even more interested to find out what would happen. 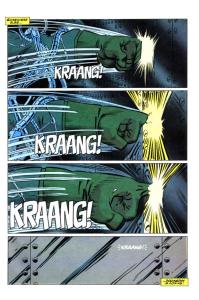 Reading it for the first time in over a decade, it is surprising how fast paced it was. There isn’t much of a “plot” in this arc, it is pretty much filled to the brim with action. Doomsday was more of a natural disaster than a character, wreaking havoc as he moved across the country. In the initial arc, we didn’t know who he was or where he came from. To be fair, the narrative was so fast paced that there wasn’t a time for answers. Doomsday is just a creature bent on destruction, putting innocent lives in danger, and drawing the attention of superheroes from over the world. A B-List version of the Justice League are the first to encounter him, and subsequently get their asses kicked, leaving Superman the only one to stop him. I wondered why other major-league DC heroes such as Batman, Wonder Woman, The Flash, or others never showed up. They do show up in the subsequent “Funeral For A Friend” arc, but not this one. Where were you guys when Superman needed you the most?

A few of the issues are pretty much just Superman and Doomsday fighting, with Lois Lane and Jimmy Olsen following the action in a helicopter. The action inevitably ends up in Metropolis, with Superman desperately trying to finish off Doomsday before he tears apart the city, giving up his life to take Doomsday out. The last issue is pretty great looking because it is just an issue of full page images, rather than traditional panels. The last page is a fold out of Superman dying.

The issue where Superman died was an immense success. But in comic books, “death” doesn’t necessarily mean death. So within a year, Superman returned to saving the world, and the whole “death” thing was pretty much revealed what it was – a publicity stunt. Soon after, Batman’s back was broken by Bane, and he was put out of commission. Like Superman, this Batman story was heavily publicized, and also like Superman, everything returned to normal at the end. I read all of the Superman arcs in this era, but I didn’t bite on the “Knightfall” saga because I knew where it would eventually lead to – the status quo.

That is always a problem with “events” in comic books, eventually everything returns to the status quo, so why care? The “Death” of Superman burned a lot of people, and they weren’t going to be burned again, so the next “event” was met with more skepticism. What comic book writers need to understand is that the way to get readers is not flashy gimmicks, but old-fashioned good storytelling. That is why they became successful to begin with and what lead them to be hugely successful companies even today. You can’t piss off your readers and expect them to keep coming back.