I have a large confession to make here.  Not once during childhood did I ever even play a Castlevania game.  I’m not really sure why because they would have been right up my alley.  Part of it has to do with the manner in which games were acquired.  Today in my 30’s if I want a game I just go out and purchase it (although that almost never happens with modern games for me anymore).  Back in the early 1990’s when I was playing NES games my entire library was acquired through gifts.  That means I was at the mercy of whomever was buying the games.  Of course there were a handful of games that I knew I wanted to own and summarily asked for: Super Mario Bros 2 and 3, Teenage Mutant Ninja Turtles II the Arcade Game, and Blades of Steel come to mind.  Otherwise games were generally purchased by parents and grandparents on the criteria of the three P’s: Price, Packaging, and Popularity.  For instance, the Karate Kid was a very popular movie so parents assumed the game would be a hit with their children.  Packaging that looked like it was going to be an interesting concept could sell a game to purchasers who didn’t know better (or in the case of Mega Man could deter a sale).  For instance, I wonder how many Castle Quest games were sold on the appealing box art alone only for the gamer to be immensely disappointed with the product.  Price of course is self explanatory.  Cheap games will appeal to buyers that aren’t players.  Lastly I did not know anyone who owned any Castlevania titles which is quite surprising in retrospect.  After all, the games were immensely popular and generally considered to be among the best on the console.  Although I recognized the Castlevania name as a quality series even in those days the opportunity to play any of the NES offerings eluded me.

When the 16 bit era approached I ended up on the Sega Genesis side of the war and most of my friends ended up with the Genesis as well.  I had three friends that ended up with an SNES.  None of them owned Super Castlevania IV despite it’s critical acclaim.  Although Genesis did receive Castlevania: Bloodlines I was completely oblivious to it as I was more interested in playing sports games and licensed titles at that point.  Another opportunity to be introduced to the franchise was squandered.

Then the 32 bit systems came out and I was actually more cognizant of the market and my tastes a bit more refined.  At least that is what I would like to believe.  I received a Sony PlayStation for Christmas 1996 and quickly subscribed to the Unofficial PlayStation Magazine.  Reading the previews and reviews as well as playing the demo discs introduced me to several new and interesting games.  One game in particular that received significant praise was Castlevania: Symphony of the Night.  Obviously this was an amazing game based on all of the attention the press gave to it.  Feature after feature focused on the game and the writers urged everyone to give it a try.  Surely at this age and with this kind of exposure I would get sucked into the Castlevania universe right?  Unfortunately I never even gave the game an opportunity.  It was a 2D game in an era where 3D was the new fad.  Who wants to play a 2D game anymore right?  Without even giving it a chance I heckled the game for being a 2D outing in a 3D age and didn’t even consider it.  Now I’m running out of excuses and have exposed myself as a gamer with bad tastes and terrible judgement.  I guess at that age I was more excited about the prospects of playing Tomb Raider and seeing Lara Croft’s crudely polygonal and pixelated assets than becoming engrossed in a 2D masterpiece of the electronic age.

Finally my chance came in the 2000’s.  I began buying up retro games on eBay in high school and accumulated a fair number of NES games for a cheap price.  In those days not many people were interested in the NES library and games could be bought for next to nothing.  I picked up a few hundred titles at that point and finally had the opportunity to play a Castlevania title: Castlevania III Dracula’s Curse.  I had heard for years that these were good games and remember popping in the cartridge and saying to myself “let’s see what all of the hype is about”.  I realized at that point what I was missing out on for all those years. 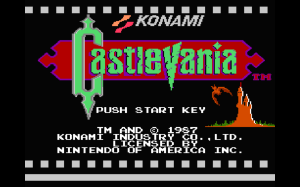 Castlevania first made it’s NES appearance in North America in 1987.  Konami had a reputation as a prolific developer for Nintendo releasing a plethora of critically and commercially acclaimed titles.  Castlevanaia was kind of a retelling of the Dracula legend while also incorporating elements from several other horror franchises into one action packed story.  Simon Belmont is the protagonist in the game which takes place in 1691.  Apparently every 100 years Count Dracula’s castle appears and as a descendent of a Vampire hunting family it is Simon’s duty to slay the count and rid the world of his evil.  Along the way he is also pitted against other staples of horror including Frankenstein’s monster, a mummy man, Medusa’s, the Grim Reaper, and of course the ubiquitous bats and skeletons always featured in these types of games.

Graphically the game was a pleasure and although it certainly did not feature the best visuals seen on the NES, they were better than most games available at the time and did a wonderful job creating an unsettling and spooky atmosphere.  Backdrops included the gates to Count Dracula’s castle, the roof of the castle, the tower, the catacombs, the torture chambers, and the evil Count’s chamber.  Unkempt and torn curtains, crumbling brick, dark passages; all of the details you would expect to see in a haunted building are present.  Simon must have a feeling of dread as he continues to penetrate ever deeper into the castle in his quest to seek out and destroy Nosferatu.

Further adding to the sense of foreboding is the excellent soundtrack.  Konami was known for churning out some very catchy tunes in their games and the Castlevania series ranks right up there with other heavy hitters such as the Final Fantasy series in the background music department.  Although I believe Castlevania II: Simon’s Quest has arguably the best soundtrack of the NES trilogy, the first game certainly has it’s share of memorable tunes.  Each track perfectly fits the level it represents and completes the immersion.

Gameplay consists of Simon using his primary weapon, the legendary whip passed down through the Belmont family as he wards off the evil lurking inside of the castle walls.  The whip can be upgraded to a morning star and eventually a morning star with a longer range.  Secondary weapons include crosses, daggers, Holy Water, and axes.  Each one has a different function.  The cross acts as a boomerang as it flies forward and then returns to Simon.  The dagger is thrown in a perfectly straight line in front of Simon inflicting damage on whatever it strikes.  The axe is thrown up and then falls in an arc to damage enemies that fly overhead and is capable of damaging multiple enemies.  Lastly the Holy Water basically acts as a Molotov cocktail.  Thrown forward it strikes the ground and bursts into flames injuring any enemy that touches the fire.

One of the strangest aspects of the game is the accumulation of hearts.  In almost every other video game hearts represent health and increase your life meter, but in Castlevania that is not the case.  In this game hearts are gathered and are necessary to use the secondary weapons.  By whipping candles and killing villains hearts are picked up which are tallied on a special counter.  Every time a secondary weapon is used a number of hearts are subtracted.  If you burn through all of your hearts you can’t use your secondary weapon.  It’s as simple as that.  Since hearts do not signify health how do you increase your life meter?  By collecting meat found within the walls of course!  Whip a section of wall and you might find a pork chop hidden within which fills up your health counter.  Apparently in the 17th century the gastrointestinal system of the typical man was hardier than today.  Or perhaps Dracula’s castle is so frigid that the meat mysteriously contained within the wall remains fresh.  Or is it just very heavily salted?  Did the builder’s put it there?  Oh well, it’s a video game.  Wolfenstein had dinners laying all over the floors for health as well so this is hardly an isolated occurrence.

Gameplay itself is mostly solid but there are certainly some cheap deaths and the difficulty level is high.  NES Hard is in effect here in spades as Simon recoils every time he’s struck by an enemy.  When this happens in a stage filled with platform jumps you can be assured that one hit will kill you even when you have a full life bar.  The gravity is kind of off making each jump more difficult than it should be and sometimes navigating the stairs in the game creates problems.  You go up when you don’t want to, down when you don’t want to, or just fall right off the steps and die.  These are pretty typical issues of the era but they are even more frustrating to gamers today that are accustomed to more refined controls.

Brave the castle, survive it’s perils, and defeat Count Dracula and the player is treated to one of the most unusual NES endings I can recall.  That’s really saying something since the beloved NES is not fondly remembered for the payoffs gamers received for completing the difficult games.  Here we overlook the castle from a cliff as it crumbles to the ground.  After that the end credits roll but these aren’t your typical ending credits!  Instead they’ve loaded them with schoolyard shenanigans as in an ill fated attempt at humor they have poked fun of actor’s names that have starred in previous Dracula films.  Vram Stoker, Christopher Bee, Belo Lugosi, Boris Karloffice, and Mix Schrecks are just some of the names we see scroll up screen here.  Perhaps this wasn’t an attempt at humor however as Simon Belmont is mentioned as “Simon Belmondo” at the end.  Maybe the localization team just did a terrible job in spell checking this game?  It wouldn’t be the first time that happened during the NES era.  After all, A Winner is You!