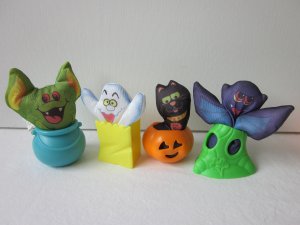 When I was a kid one of the family pastimes was the colloquial “Sunday drive”.  These were day trips to no where in particular that were typically taken in the autumn months to admire the scenery of the season.  These trips consisted of activities such as admiring the colors of the leaves, antiquing, stopping by small mom & pop arts and crafts type shops, and perhaps stopping by a fall festival.  In other words these trips resulted in extreme boredom if you were a kid in the back seat while your parents listened to oldies on the radio and discussed “grown up” things.

Perhaps the only saving grace of these trips as a kid was the possibility of getting a toy or trinket of some kind to reward you for good behavior.  More often than not this was in the form of a Happy Meal, or if McDonald’s was not present the knock off “kid’s meal” from one of the other establishments.  If your parents decided they wanted to eat at an actual restraint instead then all hope was lost and the entire day was a waste.  Fortunately dinner time would typically roll around later in the day and in a hurry to head back towards home the drive thru window was a near certainty.

Back in 1989 I found myself on one of these trips in the back seat of our two door tan 1980’s eyesore in some remote rural area in anytown USA.  As the days were getting shorter our drive was coming to an end around sunset when it was time to decide what we wanted to eat for dinner.  Choices were scarce in this remote locale but like an oasis in the desert my dad happened upon a Hardee’s restaurant.  At this particular time the chain had come to an agreement with Hallmark of all companies who produced for them a lineup called “Halloween Hideaways”.

There were four in all.  Essentially you received a plush Halloween character that you could shove into a  plastic container that was also seasonal.  Apparently these were a knock off of a Fisher Price toy called “Smooshees” which used the same premise.  You’d shove a plush toy into some kind of container.   Very exciting.  The assortment consisted of a black cat in a Jack O’ Lantern, a bat in a tree stump, a goblin in a cauldron, and then the ubiquitous ghost in a trick or treat bag.  I remember seeing the commercial for these toys before getting them but wasn’t quite sure what the appeal was even back then.  But on this trip I was excited to come away with anything at all and so I welcomed the kid’s meal and the toy it contained within.  I hoped for the ghost and was relieved when that was what I received.  I actually had the toy for many years afterwards, always smashed up inside of his trick or treat bag.  For years he served as a reminder of that brisk autumn day in 1989.

Although I never completed the rest of the set, or even knew anyone else that owned a single one for that matter, I’ve always looked back on this assortment with fondness.  That little specter in the bag will always serve as a catalyst to a trip down memory lane and memories of Sunday afternoon’s in the back seat of that hideous car zipping down the back roads of America.