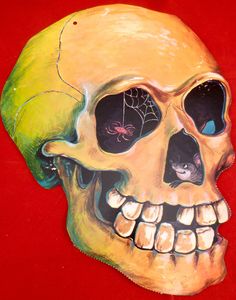 When I was a kid, one of the annual Halloween traditions in my house as well as around the neighborhood was to put cardboard cut outs with Halloween imagery up in the windows.  If you’re about my age I’m sure you remember these things.  Essentially it was a flat piece of cardboard with printed artwork of some Halloween image on it.  General themes were Jack O’ Lantern’s, black cats, skulls, vampires, ghosts, and the “friendly fall” variety of happy scare crows.  One side was flat cardboard and the other side had felt on it typically.  Sometimes they were flat cardboard on both sides, and sometimes they were only one sided.  It depended on if you went to the high end dollar store or the “economy” dollar store on the poor side of town.  To decorate all you had to do was tape these things up in a window.  Of course since they were made of thin cardboard they were not very durable and the sun would eventually fade the image ensuring that they only lasted a few seasons.

You knew Halloween was here when your mom would drag the dusty box of Halloween decorations up from the basement (complete with that smell of a box where the bottom has gotten wet) pull these things out, and help you scotch tape them up on the windows and doors.  Inevitably you would be upset with how a piece of tape was seated on the decoration and as you went to peel it off a layer of the artwork would come off with it.  Tragic.  After hanging these up it was time to get the fake cobwebs with real dead bugs in them out.  It was always amazing what kind of crap got stuck in that webbing after a year in storage and invariably it never lasted long before it was replaced with a fresh batch.  Don’t forget the plastic spider rings that came with them! 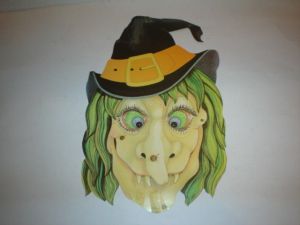 As a child I remember riding in the school bus down the streets of my neighborhood and it seemed as if every household that had a kid would plaster these things up in their windows.  They were also prevalent inside of the classrooms at school.  It seemed like everyone that was doing any trick or treating had at least one of these in their household.  At some point in the late 90’s they started to disappear and I honestly haven’t really seen them since.  What happened to them? 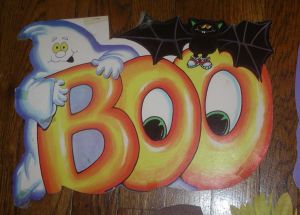 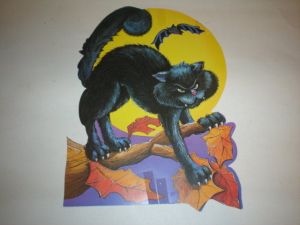 Why did they suddenly fall out of favor?  I honestly couldn’t tell you the last time I’ve seen one in a window or even available for sale at a store (although I honestly haven’t looked for them at retail either).  Who else remembers these?