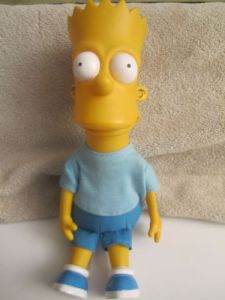 It didn’t take very long for the popularity of The Simpsons to soar.  The full length episodes made their debut on FOX in December of 1989 with the Christmas special and by the spring of 1990 the show was already a sensation.  At first there was some controversy as to whether a cartoon like The Simpsons should even be watched by and marketed towards children.  Bart was the featured character in most of the early episodes and as a result he was also the most promoted character in early Simpsons merchandise.  Believing Bart to be a bad role model, some schools at the time actually banned apparel and clothing featuring his likeness.

Bart appeared everywhere in 1990 in what the media dubbed “Bartmania”.  T-shirts printed with Bart Simpson on them sold as many as a million units a day in the summer of 1990.  In fact, Simpsons merchandise generated $2 billion in revenue within the first 14 months.  It wasn’t long before video games, PVC figurines, mugs, and other assorted memorabilia was stocked in stores.

Of course, I was not immune to such a marketing blitz and needed a piece of the Simpsons universe in my own home.  Enter the Dan Dee Bart Simpson plush vinyl doll.  Most kids my age that were allowed to watch The Simpsons had one of these at the time.  That’s an important footnote because there were several schoolmates I knew that were forbidden to view The Simpsons or even tune in to FOX in general.  In my own home, Married with Children was on the do not watch list and The Simpsons was closely scrutinized at first, but eventually received a pass as long as I did not adopt any of Bart’s mannerisms.

Dan Dee’s doll was certainly a unique effort.  Most kids my age were accustomed to action figures.  Star Wars, Batman, Teenage Mutant Ninja Turtles, pro wrestlers, GI Joe, and most other franchises that were marketed and geared towards children had gobs of small plastic action figures populating the pegs at the department stores.  These toys of course were between 4 inches and 6 inches tall and were blister packed with several accessories.  The Simpsons would not receive the action figure treatment for over a decade however.  Instead, during the prime of the show what we got were half vinyl, half plush dolls with no accessories and limited opportunities for playability.  Most of these dolls simply became display pieces in our bedrooms. 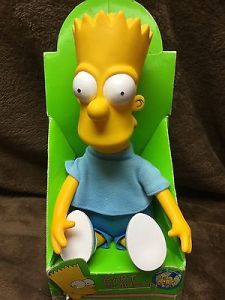 Bart’s doll consisted of a plush body clothed in a separate t-shirt with vinyl arms, legs, and a head.  The head would rotate left and right.  That’s about it really.  The leg “joints” were actually just flat folds where the appendages were sewn onto the body.  The arms were sewn on and could kind of be moved but not very well.  Bart’s face itself had a pretty derpy look on it.  I can’t say that the likeness is bad per se, but there’s just something not quite right about it.  It’s almost like watching an early episode where the character animation wasn’t quite refined yet, molded into vinyl and slapped on a crappy plush doll.  The bottom is stamped with Matt Groening’s autograph.  Cool.  Even as a kid I was disappointed with the effort on these.  You couldn’t do anything with it but set it on a shelf and move on to more entertaining pursuits.

Then you have the matter of the shirt.  It’s blue.  Bart Simpson’s shirt is blue.  Good heavens blue!  I’ve seen every episode of the show through the first 10 seasons numerous times and I don’t recall ever seeing him wear a blue t-shirt.  Maybe things changed in the present millennium when the show became an undead zombie version of itself but this thing was made in 1990. It’s inexplicable how manufacturers and toy makers screw this kind of thing up, but it seems to happen all the time.  It’s not like this doll was the only example of Bart’s blue shirt either. 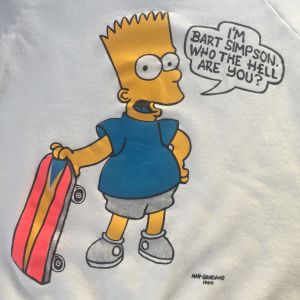 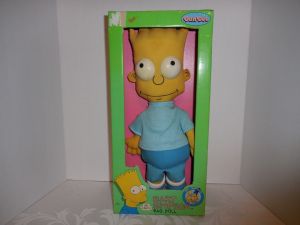 How does this happen?  In the most rudimentary element of design.  Get the color correct.  From Luke’s yellow lightsaber to Shredder with a blue and purple helmet (and no shirt), to Bart Simpson with a blue shirt I’ve never understood how toy companies can screw this kind of thing up.  With all of the source material and resources available to a producer of an officially licensed product something like this should never happen; and yet it seems to routinely.  However, I always operate under the assumption that most people are rube’s.  When you put things into context using that theory suddenly everything around you becomes clear.  It’s almost as if you have unlocked the secret of the universe.  Of over 7 billion people on earth most of them are buffoons incapable of accomplishing even the most basic of tasks.  In fact, sometimes it legitimately surprises me that certain people are able to even keep themselves alive.  When taken into consideration, the fact that mass releases of Bart Simpson dolls with incorrect shirts would be released is hardly surprising under that world view.

Pony up a few extra bucks and you could upgrade to the talking version of this doll.  It’s exactly the same as the standard release with the exception of a pull string on the back.  Yank it and you can hear Bart’s voice mutter series staple phrases such as “Aye Carumba!”, “Don’t have a cow man!”, “No way man!”, and the iconic “Kid’s in TV land, you’re bing duped!”.  Wait wut? Unfortunately as is the case with most of these pull string talking toys, today the speed on them is completely off and anything Bart says is in extremely high speed and completely unintelligible.

These things were everywhere and as a result are pretty cheap on the secondary market.  I’m not sure why anyone would want one really.  Dan Dee did make smaller dolls of the rest of the family as well as a smaller Bart doll with accurate red/orange shirt. None of the other characters had the wrong clothing color.  Considering that Bart was the most heavily promoted character it always amazes me that so much junk was produced with a blue shirt on instead of the proper red/orange.  It’s amazing to think that at the time of this writing the show is still on the air in it’s 27th season.  There are actually more episodes of the show that I haven’t seen than ones I have watched, and I used to religiously tune into this show every Sunday, then Thursday, and then Sunday night in addition to watching it in syndication every weeknight through 2001.  Today you can find all kinds of Simpsons themed products but it all began here.