I’m not the biggest Bond fan out there.  In fact I’d say I’m nowhere in the vicinity of being considered a mega fan.  Since I was introduced to the franchise though Goldeneye and later became a fan through the Goldeneye video game I have thoroughly enjoyed the franchise and would catch the films on TV every chance I could.  My first real exposure to the older movies was through TBS and their “15 Days of 007” mega marathon they used to run in December leading up to Christmas.  From that point forward I decided that potential once a year viewings were not enough and that I wanted to own all of the movies on home video.

Around 1999 I remember staying up late and seeing an infomercial for the entire James Bond collection on VHS.  The set could be had all together or in volumes of 7 or so movies that were kind of thrown together in non-sequential order.  I never understood why companies did that.  Just put them out in the order of release and line them up that way on your shelf.  Instead you would be forced to buy all the volumes and rearrange the tapes.  Oh well.  I had decided that this was something I wanted; until I saw the price.  The retail was several hundred dollars and as a high school student it was simply not a reality.  I did however know one person who had this enhanced set: our own author TPS1983 who seemed to have most VHS tapes that had ever seen the light of day.

About the time I graduated from high school DVD’s were beginning to become the mainstream format and MGM certainly wasn’t going to miss an opportunity to sell consumers the same product again.  The entire James Bond collection was rereleased in the newer DVD format and sold much the same way as the VHS counterparts.  Instead of just getting the feature films however each movie also included several bonus features that the DVD platform introduced most of us to.  This time I thought it was something attainable as DVD’s seemed to be selling for cheaper than VHS tapes did across the board.  I managed to get a few films piecemeal as gifts but I never did actively attempt to purchase all of the movies and again missed out. 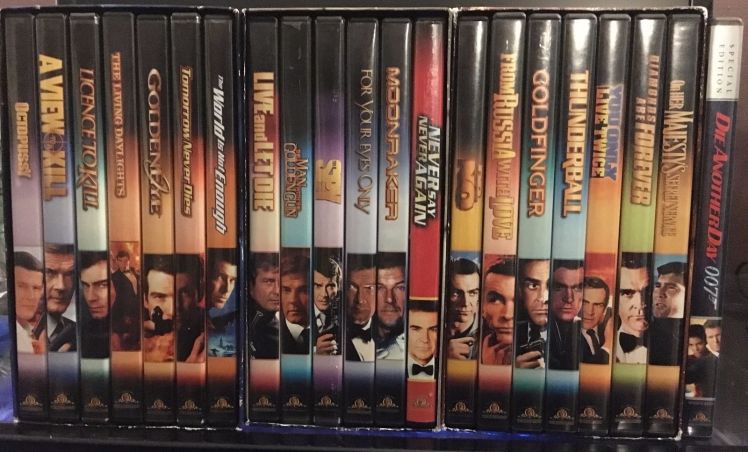 Then in 2012 MGM released a large boxed set commemorating 50 years of 007 on the big screen encompassing all of the films from 1962’s Dr. No up to Quantum of Solace.  This was released both in DVD format and on Blu-Ray disc.  Rather than being packaged in the typical large box with a case for each movie the set was released in a thin box comprised of two books.  Each book contains a sleeve for the disc with graphics from the Bond films of that era with a release year printed on the page next to the disc.  It looks nice on a shelf and doesn’t take up nearly the space of the previous collections.  Surely this would be the set I finally would cave in to purchase.  Well, not quite.

In 2013 the set was re-released to include the disc of Skyfall which had a 2012 theatrical release and thus was not included initially (although an empty sleeve to place the disc was included in the first set).  My wife was browsing Amazon around Christmas season when she happened to see a lightning deal on this new set.  Combined with several Amazon gift cards she already had I would end up receiving the set for Christmas of 2013 at practically no cost to our family financially.  It was certainly worth the wait as this set is fantastic. 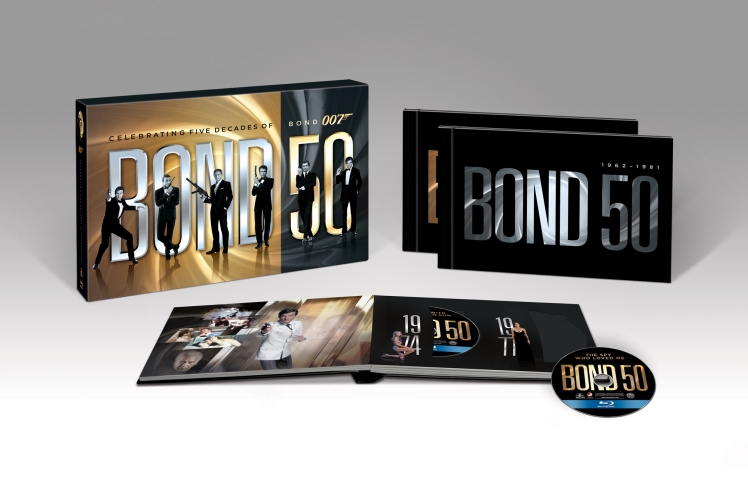 The set is a massive undertaking and is loaded with tons of extras and bonuses.  Honestly I’ve barely scratched the surface of what’s offered here.  In total there are more than 120 hours of extras comprised of behind the scenes features, interviews, documentaries, and commentaries.  Some day I’ll have to actually check all these bonuses out but thus far I’ve really only watched the movies themselves.  I will say that just having the films is worth it to me and watching my favorites on Blu-Ray alone was worth the price of admission.  However, if you’re a special features addict this set will surely please you.  In addition to the 23 films from Dr. No to Skyfall each on their own separate disc a bonus 24th disc is included which is comprised of nothing but extra materials.

I’m not a “packaging snob” and don’t typically worry about how an item is presented in great detail but I’ll further expand on what I stated earlier.  The outer box is a sleeve with the BOND 50 graphic seen above.  The right of the sleeve gives access to two books which slide out.  The first of which is labeled “1962 – 1981” and includes the Bond films from Dr. No through For Your Eyes Only.  As you flip through the book the right page has sleeves for two discs labeled only by year.  Each movie title is printed on the disc itself and not on the page.  The left page features images and screen stills from the movies contained on the right page.  Simple but effective.  It is a little difficult to get the disc’s out of the sleeves but not overly so.  The second book is labeled “1983 – 2012” and includes the Bond movies from Octopussy through Skyfall.  The layout is identical until you reach 2012.  On this page the two disc’s included are Skyfall and the one labeled “Bonus Disc”.  The left page, rather than featuring still images from Skyfall is comprised of head shots from all 6 actors to have played James Bond in sequential order.  A nice little “end” to the set.

Now to me the best part is the video quality.  Each movie is presented in 1080P and for someone who first watched most of the Bond films on a 4:3 television in standard definition and cut to full screen it’s certainly a great experience.  Seeing all of the little details and set elements blown up and in your face after all these years is almost like watching the movies again for the first time.  Now granted, the older films do have some imperfections and age issues but it doesn’t detract from the enjoyment in the slightest.

If you’re even a little bit of a Bond fan or if you can find this set at a good price I’d heartily endorse it’s purchase.  If you’re a mega fan that has somehow missed out on the previous releases then this is a must own piece.  As an aside I’ve always wanted to watch every Bond film in order over a month or two leading up to a new release.  I didn’t have the chance to do that this time with the release of Spectre in theatres but perhaps next time I will plan accordingly.  There is however a big upcoming movie this December with only 6 “true” feature films in the series that I may be able to watch in advance of the next release…..