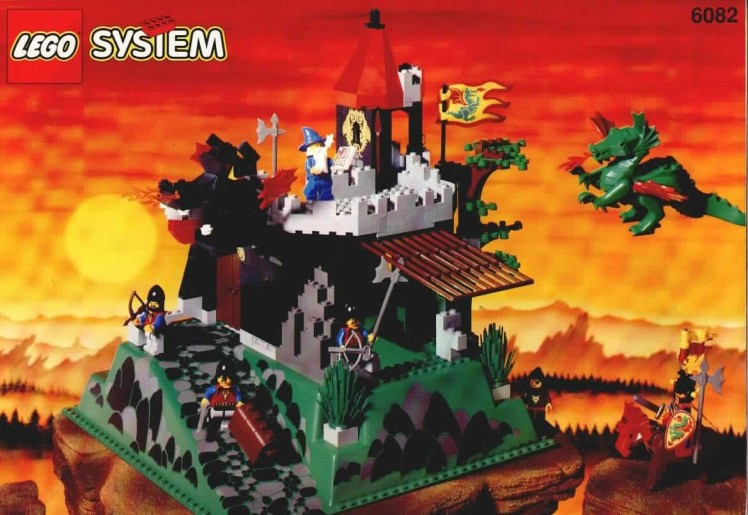 It was always a Christmas tradition at my house that I receive one of the larger Lego sets as a gift.  Comparatively Lego sets seemed to cost more in those days than they do now so receiving one of the sets with a higher piece count was typically reserved only for special occasions like birthdays and Christmas.  Going through the years I can remember with great clarity all of the sets I had received and for which occasion as opening one of those glorious yellow boxes with the raising front flap that let you take a peek at the special pieces contained within felt monumental.

In December of 1994 I was in my “space phase” mainly interested in the newer Spyrius offerings as well as the Ice Planet 2002 sets released the previous year.  Castle and Pirates, which would ultimately become my favorite two themes had been put on the back burner for a couple of years in the early 90’s for some reason as I decided that “space was the place”.   My first larger set #6081 King’s Mountain Fortress was sitting in a closet in pieces as my ever increasing fleets of star fighters shone brightly in the spotlight.

The tide began to turn on December 24 (our family did Christmas on Christmas Eve rather than Christmas Day) when I opened the big package that rattled when you shook it.  I knew it was a Lego set but which one?  I already had the #6959 Lunar Launch Site.  I also hadn’t really asked for any of the larger sets specifically at that point as I was building up most of my fleet of stunt fighters.  I was actually not sure what to expect and was completely surprised when it was the home of Majisto the magician and his evil Dragon Masters henchmen.  Although space was my preffered theme at the moment no kid is going to be upset by a Lego set and I feverishly assembled it that night. 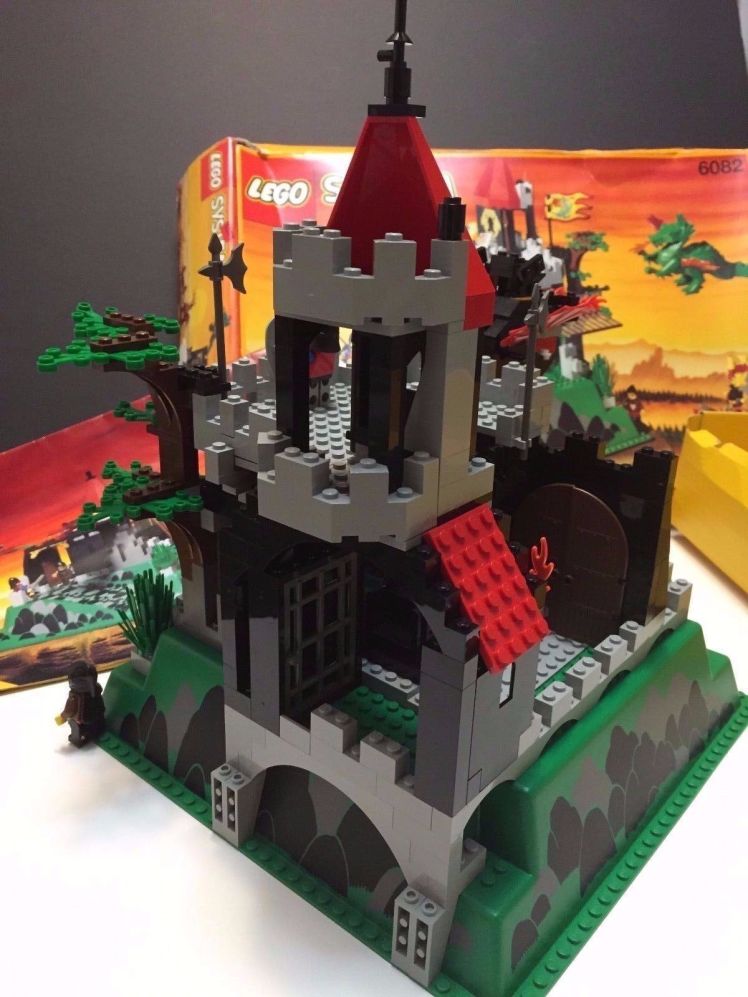 Immediately the first thing that stands out to most people is the inclusion of a dragon which was my first.  In fact, this entire structure is built with the dragon as the focal point as the central portion of the building is a large caged in area meant to house the legendary beast.  Front and center is a large brown grate that the builder lifts up and down to release or contain the fire breathing foe.

The castle is built atop one of the standard Lego ramp and pit base plates.  The pit is the home to the dragon while in captivity, the ramp on the side of the plate is actually outside of the structure and leads up to the front gate of the building.  It is here where the unsuspecting traveler encounters the first trap as the ominous dragon head above the door contains a mouthful of rocks which are dumped on the visitor with the pull of a pin.  At this point the mouth drops open and a payload of 1×1 grey bricks pour out and slide down the ramp crushing whomever dared to disturb Majisto. 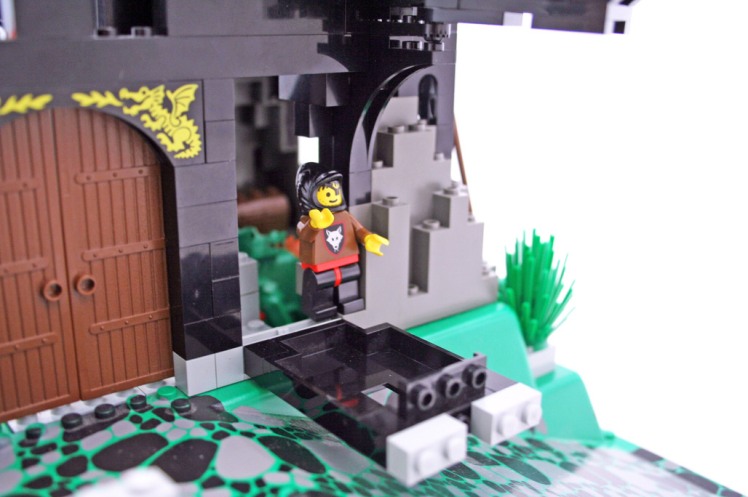 Entering through the front door leads to a hallway.  To the right is an alcove that leads to a secret passage out of the castle.  A section of wall drops down leading to the ramp.  Straight ahead is a prison cell and a staircase that leads up to the roof of the castle where the second trap lies.  The floor here is an enormous trap door that drops the unsuspecting victim down into the dragon’s lair where he will be roasted and devoured by the ravenous monster.  The roof also contains a balcony and Majisto’s tower.  The side of the castle opposite the ramp is comprised of an enormous tree embedded into the structure.  At the time I was excited just to have several brown pieces in the set as it seemed that it was a “rare” color for pieces back then.  Speaking of brown, you get a brown horse which was a departure as most of the horses were white and black.  Finally the set also includes an enormous cloth dragon flag which I really liked but was disappointed that it only had printing on one side.  As long as the wind always blows from left to right it’s of no concern.

Defending the castle are a Dragon Masters knight on horseback, a footman, an archer, a crossbowman, and of course the ominous dragon all led by Majisto.  Also included is a hapless and weaponless one eyed Wolpack renegade who is depicted as attempting to rob the castle of it’s chest of precious gemstones.  Although the compliment of soldiers is rather small for a “main base” the structure itself doesn’t have a particularly large footprint and most of the interior is taken up by the dragon’s den.  As such, four soldiers and Majisto seem adequate enough.  Furthermore the dragon itself is more powerful than a small army of soldiers and the inhabitants can also fall back on several traps within the castle for it’s defense.

For the rest of my childhood the Fire Breathing Fortress was the home base for all of the evil knights in the ensuing wars with the kingdom of Royal Knights are the older and withering Lion Knights.  Although the forces of good could never seem to form an alliance to consolidate their forces in the effort to rid the land of Majisto, the evil knights never had a problem coordinating their armies and committing atrocities while Majisto ordered his forces from the tower of this fortress. 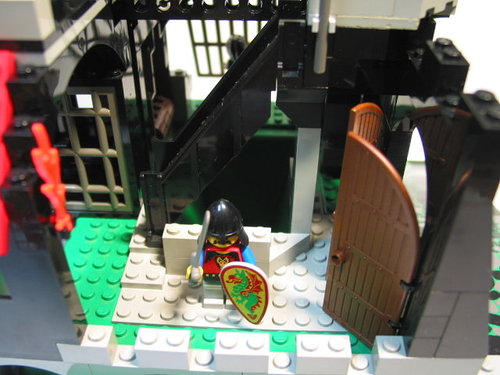 If you’re a fan of realistic castle construction and historical accuracy then you will be greatly disappointed with this set.  However, the dragon knight’s led by the sorcerer Majisto are rooted in fantasy and were meant to encourage imagination.  In that context this set delivers.  I really enjoyed it at the time and I still like it to this day.  No it isn’t my favorite set of all time but it was my first “bad guys” base in the castle theme and it also rekindled my interest in the theme as a whole which opened the door to several of my favorite Lego sets.  It’s possible that I wouldn’t have had the pleasure of owning several of the great castles I enjoy so much without this set to blaze the trail and as a result this will always have a special place in my heart.