The release of “Mortal Kombat” in 1993 came at the right time for me. It is right in the middle of the fighting game boom surrounding Street Fighter II. What put this game over the top for me was the controversy around it. Let’s face it, when adults were so against something, it made you at least interested in trying it to see what the big deal was. To be fair, I wasn’t really a fan of fighting games. My video game taste at the time skewed most to games of Mario Brothers and Mario Kart variety. But playing Mortal Kombat seemed to be the “in” thing to do, so I asked and received the game for my birthday that year.

It is hard now for people to understand how controversial Mortal Kombat actually ways. Today we live in a world where the gore of Mortal Kombat is quaint compared to the common violence and gore of the typical video game. But at the time, it was damn near suggested that kids playing Mortal Kombat would turn into violent fighters. From the vantage point of 2016, Mortal Kombat is simply a great fighting game. Really all the backlash against the game merely led to higher sales and even bigger anticipation for Mortal Kombat II, which followed in 1993.

In the early nineties, there was a war between Nintendo and Sega, as well as the fans of either. My first video game console was the original Nintendo, so I ended up getting Super Nintendo when it came out. A few years later I ended up getting a Sega Genesis for Christmas. This led to the dilemma of what games to get for what system. Obviously the Mario games and Sonic games were console exclusive, but what about titles that were made for both systems? Well, to be honest, I gravitated towards SNES games for the most part, as that was my favorite system and remains my all time favorite console. 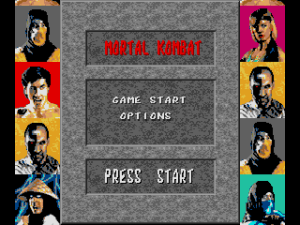 The decision to get Mortal Kombat on Sega rather than the SNES was a no-brainer. Whereas the Sega version had the blood from punches in the game, the SNES removed the blood from their version. This definitely confirmed the “kiddie” reputation that hung around Nintendo. Why would you get the sanitized SNES version if you had the capability to get the “hardcore” Sega version? So I eagerly awaited playing the “adult” video game. 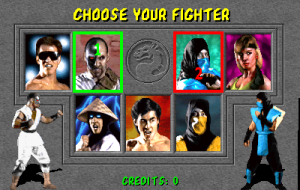 I can’t say I am a huge fighting game fan. I was more into the side scrolling games or Mario Kart, but Mortal Kombat was addictive. My character of choice was Johnny Cage. I can’t exactly remember why, but I’m guessing it was because he was “cool” because he wore sunglasses. I did pretty good in the early fights of the game. Obviously as it went along, it got harder, and it became nearly impossible for me to beat, especially the endurance levels. It was really the characters that put this game over the top. Each of the characters had a unique look and style. If I didn’t play as Johnny Cage , I would have went with Scorpion, if only so I could hear, “GET OVER HERE”again and again.

What really drew me, and countless others to the game was the violence. In the age before the internet, we were pretty hard up for violence, and this game was the best place to get our fix. When each impact on your opponent drew blood, it became really exciting. The coup de grâce  was the fatality. Really putting a stamp on your hard fought victory by brutalizing your opponent. You pretty much had to try all the other characters at least once, if only to try out their fatalities. My favorite remains Sub-Zeroes spinal cord rip.

For a while, Mortal Kombat dominated popular culture. The merchandise was everywhere, including action figures, pogs and t-shirts. A feature film was made based on the first game and was a huge success. In the decades since, Mortal Kombat hasn’t gone away, with Mortal Kombat X having been just released. As long as there is a taste for fighting games, Mortal Kombat will endure.