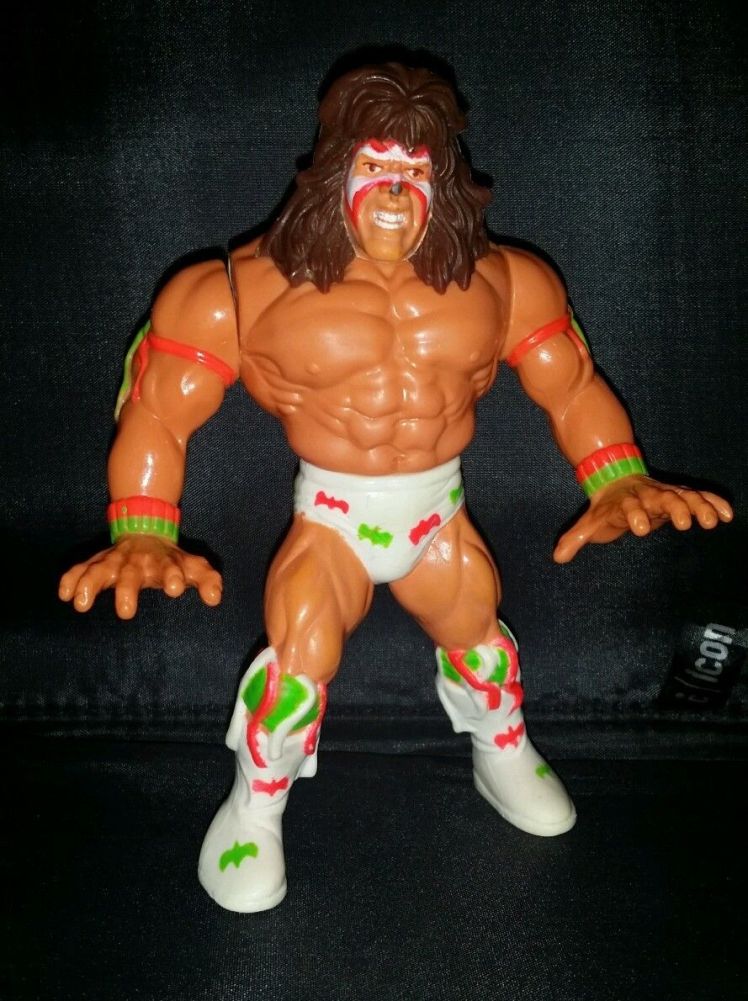 One of my first topics here detailed the fantastic Macho King Randy Savage figure released by Hasbro in 1991.  For those too lazy to click the link fear not as I will offer a brief summation of that now vintage entry.  Up until my birthday of 1991 the only World Wrestling Federation action figures I owned were the large rubber LJN behemoths that also doubled wonderfully as clubs to win arguments.  My parents had refused to buy any of the Hasbro figures because they felt the change in scale was a scam to force people who had invested in a multitude of LJN to repurchase the same wrestlers.  When an outside party gave me a gorilla press slam Hulk Hogan for my birthday the walls had been breached and it was now time to hop on the Hasbro train.

In our house St. Nicholas Day was a special tradition celebrated every December 6.  Now, I didn’t know who St. Nicholas was or how he was any different than Santa Claus but the tradition went as follows:  On the eve of December 5 you place your slipper by the door.  St. Nicholas comes over night and fills your slipper with candy and small presents.  Although I was thoroughly confused by the meaning of the holiday I certainly was not going to pass up the opportunity for presents so I eagerly placed my slipper by the door every year and went to bed with great anticipation.

On the morning of December 6, 1991 I woke up to a book of Life Savers, a candy cane filled with miniature Reese’s Peanut Butter Cups, and the Series 2 Ultimate Warrior figure nestled between the wall and my slipper.  Ultimate Warrior was one of the most popular wrestlers in the world in 1990 as his feud with Hulk Hogan was ramping up.  But by December of 1991 not only had his star faded after a lackluster title run that ended at the hands of Sergeant Slaughter at the Royal Rumble, he hadn’t even been seen since SummerSlam ’91 in August.  To fans he simply disappeared without a trace.  Behind the scenes Ultimate Warrior held up WWF owner Vince McMahon for more money at SummerSlam ’91.  Although Vince did acquiesce he promptly fired him from the organization for his unprofessional conduct.  None of this was ever mentioned on WWF TV and fans were simply left to wonder.

Personally I was never a fan of the Ultimate Warrior, even as a kid.  Hulk Hogan was the man while Warrior just spit out unintelligible drivel that I had difficulty understanding both audibly and cognitively.  To say that I was on Hulk Hogan’s side of the incredible WrestleMania VI feud would be an audacious understatement to put it mildly.  Hulk Hogan was unequivocally the biggest star and top wrestler in the World Wrestling Federation in my seven year old mind.  Of course in those days wrestling acumen was based on factors such as win/loss record rather than work rate, match quality, or other factors that the IWC now somewhat obnoxiously but generally correctly shoves down a “smart” fan’s throat.  Ultimate Warrior in my mind was just a pretender to the throne.

That’s why it was curious that when the morning of St. Nicholas Day arrived all those years ago that the big guy would leave behind an Ultimate Warrior figure.  Maybe he made a mistake and intended to leave it at another kid’s house.  Maybe I was to reenact the epic WrestleMania VI encounter in the toy wrestling ring with the correct outcome this time.  Perhaps I’m overthinking this and it was just a thoughtful gift of a wrestling figure going to a young wrestling fan.  No matter the cause, those are the events that led me to acquiring my series 2 Ultimate Warrior figure.

Like most of the Hasbro line, the figure included an “action feature” which was billed as the “Ultimate Slam” which was the same as series 1 Hulk Hogan’s Gorilla Press Slam.  It works well but I’ve always disliked action features on figures because they limit imagination and hamper pose-ability.  It’s a shame too because the Hasbro figures had probably the best roster of WWF figures to work with and the sculpts and likenesses were fantastic but the action features really grind my gears.  At least they have some articulation though unlike the classic but statuesque 1980’s LJN behemoths.

Ultimate Warrior’s face sculpt, face paint application, details, and likeness are all dead on and a perfect representation of 1990/1991 era Ultimate Warrior.  Hasbro always did an excellent job with the particulars on their figures.  All of the colors and accentuating features of a wrestler’s ring attire are accurately represented on their figural counterparts.  This figure specifically has a white, green, and red motif with the wristbands, biceps tassels, boot tassels all present and the figure is sporting the “mini warrior mask” pattern on the boots and tights.  On top of that Ultimate Warrior looks appropriately muscular here with all of the appropriate striations and bulging veins.

Ultimate Warrior ended up becoming a jobber in my small collection of Hasbro figures.  He typically lost to the Macho King in a #1 contender’s match before Macho King would ultimately fall to World Wrestling Federation Champion Hulk Hogan.  Although he wasn’t my favorite wrestler the figure did get plenty of play time and it’s certainly great to have variety.  Looking back I really wish I had acquired more of these figures during childhood as the WWF roster was really deep at this point.  But in 1991 my toy focus was firmly on Teenage Mutant Ninja Turtles and Batman.  Despite still watching WWF programming weekly, I had sadly already graduated from their action figure offerings.