Few toys represent childhood to a generation of kids like the Ecto-1 did to children of my era.  In the mid 1980’s Star Wars was already in the rear-view mirror, Teenage Mutant Ninja Turtles had yet to arrive, and although pro wrestling was in the midst of it’s biggest boom period in the history of the sport, there are only so many possibilities for toys based on pro wrestling.  Namely a wrestling ring and the wrestlers themselves.  Filling the void were The Real Ghostbusters.  Based on the hit 1984 movie, the 1986 cartoon was a phenomenon that one could argue was universally loved among kids.  Nobody hates the Ghostbusters.  Seriously I implore you to ask ten people you meet what their feelings about the Ghostbusters are.  People may like them, love them, think they or ok, or will be indifferent.  NOBODY hates the Ghostbusters.  As a result Kenner’s Ecto-1 vehicle was ubiquitous among households purchased for fans or by well wishers alike.

Although I owned all four of the Ghostbusters themselves very early in the production run as well as all of the early release ghosts, the Ecto-1 for eluded me for years.  I can’t quite explain why.  It was certainly very prominent having been stocked in every toy aisle of every serious department store in America in the 1980’s.  My parents certainly knew I was a major Ghostbusters fan having purchased all of the 1986 figures for me as well as several of the later offerings.  Maybe it was price, maybe it was bad timing, or maybe just bad luck.  That all changed during the Christmas of 1989 when I finally unwrapped the beauty in the bluish purple box.  No longer were the Ghostbusters forced to walk from job to job with 50 lb Proton Packs strapped to their backs (except for Ray who was unable to wear his).  They were now able to cruise from one site to another in their custom 1959 Miller-Meteor combination car.  Sweet.

Kenner’s Ecto-1 was an impressive toy that looked identical to the source material and had some great play features.  Most famous was a claw attached to a string branded the “Ghost Claw” (ghost included).  Basically you pulled this claw out of the back of the vehicle with the rear door pulled down.  It clamps onto the attached orange ghost, or any other ghost or toy.  Then you would move the exhaust pipe on the car into a different position that would activate the reeling feature.  Roll the car forward and the claw reels in, retracting into the back of the car.  On top of the car is a gunner seat with dual “GhostBlaster” guns.  You can strap a figure into the seat and they will ride atop the vehicle capable of shooting at ghosts in all directions.  It almost reminds me of the odd “ghost vacuum” idea from the terrible NES game.

Now, although this was a great looking toy and was extremely popular with my age group, I’m not going to stick my head in the proverbial sand and pretend everything was perfect.  This is far from a perfect toy and it possessed a few frustrating aspects that I even disliked as a youth.  First and foremost, there are only two seats.  Three if you count the gunner seat on top.  There are four Ghostbusters.  Do I even need to elaborate further on this point?  I will since I am hoping to pad the word count just a hair.  I may not be a mathematician but those numbers just don’t mesh.  Why would you make a car for the Ghostbusters that doesn’t seat all of the Ghostbusters?  Especially when there is so much wasted space in the interior.  Only the front doors open with the rear doors being nothing but non-functional décor.  I would have preferred the cargo area to be smaller and the seldom used ghost claw feature removed and replaced with a back bench and doors that work.  Then all of the Ghostbusters could ride together.

The second issue for me was the gunner seat on the top.  I don’t remember that being mounted up there on the show.  Ever.  Why did they feel the need to include that?  There could have been all kinds of cool do-dads and other electronic looking gizmos stacked up there.  What about a satellite dish or some kind of a rotating cannon that fires a spring loaded missile instead?  Although neither was in the show they seem to make more sense or at least fit the spirit of the roof rack more than a gunner seat.  Those ideas are just winging it off of the top of my head also.  I’m sure if I watched some episodes of the show I’d come up with some actual cartoon inspired features.  Kenner did have a problem implementing elements from the TV show into the toy line opting instead to use their own ideas. 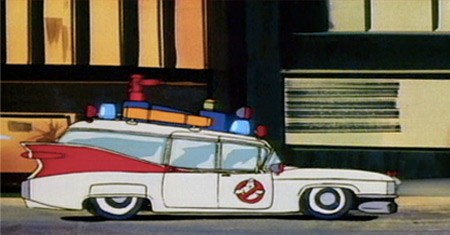 Third was the lack of electronic sounds or lights.  Can you imagine a toy Ecto-1 with the trademark siren and flashing lights?  That was a huge part of the allure of the vehicle and Kenner completely missed the mark by not including those features.  A small soundboard and a few lights for the top couldn’t have cost too much more to include but the payoff would have been phenomenal.  I guess Kenner realized that no matter what they did this would fly off the shelves.

Last was the amount of wasted space inside of the vehicle.  As I suggested earlier having a rear bench and working rear doors would have at least allowed all four of the Ghostbusters team members to comfortably ride inside of the vehicle rather than one being strapped to the roof while the other was stuffed in the back like a dog going to the vet.  I can only imagine that so much rear space was wasted to include the unnecessary claw.  Why not scrap that unpractical idea and have some kind of a storage compartment or rack for the proton packs and other Ghostbusting equipment?  If catching a ghost is as easy as ensnaring them in a claw, then what was the point of the proton packs and the traps to begin with?  I just really disliked that claw.

Although I can’t help but smile when I reflect on the toy, I also feel that it could have been so much better.  Perhaps the improvements I would like to have seen would have made the vehicle too costly to mass produce and it wouldn’t have experienced the massive success it did.  Even though it was certainly flawed I played with mine like crazy to the point where it is now little more than a ravaged hull missing nearly every removable component.  That would indicate that it was thoroughly enjoyed.