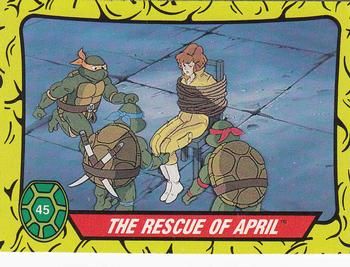 Although the most recent TMNT film “Out of the Shadows” seems to have come and gone somewhat uneventfully, I’m still riding on a nostalgia kick in regards to our heroes in a half shell.  The rise of the Ninja Turtles was meteoric at the end of the 1980’s.  Like Member’s Only jackets and Cabbage Patch dolls, seemingly overnight everyone wanted a piece of this property and Topps was quick to dump a set of trading cards featuring our adolescent reptilian warriors.  After all, everything else in the 80’s and 90’s had a trading card set so the marriage of trading card stalwart Topps and TMNT seemed like a perfect fit.

In 1989 a set of 88 trading cards and 11 stickers would hit convenience stores everywhere.  They were bundled into the old wax packs that were the standard of the time.  Basic packs gave you five cards and a sticker.  Market penetration was phenomenal in my neck of the woods as these cards could be spotted at nearly every street corner.  Everyone I knew had piles of these cards sitting around as they were great stocking stuffers or quick gifts for youngsters that loved all things mutant.  Despite their wide availability, I didn’t know anyone that owned a complete set of these.

Apparently factory sets were also available, which I did not realize until I did some research for this “article” (it’s hard to call a nostalgia piece about 27 year old trading cards based on a cartoon an article).  Buy the factory set and you received 22 exclusive cards with art from the comic books!  Holy crap my life is now incomplete.  The base set of 88 cards featured images from the 1st season of the syndicated cartoon show.  Essentially each card contains a still from an episode with one of the cheesy captions Topps was known for on the front and a description of the scene on the back. 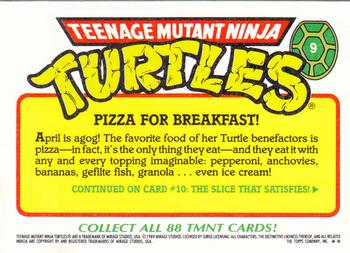 I can still vividly recall sitting indian style on the yellow shag carpet of my bedroom sorting through these cards and reading the backs, eagerly determining which cards I owned and which I was missing in the vain hopes of acquiring the entire collection.  Looking back, I don’t think I ever completed one freakin’ set of cards in my entire childhood.  By the time I was cognizant of what I was actually searching for, card companies were loading up their offerings with insert and chase cards and upping their base sets to 400, 500, even 700 cards (split into several series) making acquiring a full set nearly impossible.  That said, it was still always fun to tear open a fresh pack of cards to see what goodies were concealed beneath the wax and above the gum.  Well, these cards didn’t include gum but that wasn’t necessarily a loss.

The stickers were your standard fare.  I remember slapping these on my notebooks, and then carefully attempting to peel them off to place in my homemade (and rather poor looking) sticker album that I was inspired to create based on a real store bought sticker album a classmate had brought to a show and tell.  Rather than being cut, these stickers were all the exact dimension of the cards and included the awesome multicolored shapes that all of these 80’s and 90’s designs seemed to include in the background.  Here you see Raphael looking like he’s smiling after letting loose some gas.

All in all Topps did a good job with this set, capturing the feel of the property with the cool turtle shell looking borders and the green motif.  They must have been a success because a second series was released which I remember precisely NOBODY having.  These cards continued the numbering but had a black border instead of the green border I was used to.

Maybe it was just my region but I don’t remember anyone owning the series two cards.  I’ve honestly never seen them until writing up this article and looking into the vast and crazy world of vintage late 1980’s cartoon show trading card collectible sets.  It’s odd because so many of my friends fawned over the first series, and in fact I have a nice tall stack of the series one cards sitting in front of me as I type this on my MacBook (now I’ve just lost credibility as I will be deemed a “yuppie”).  The series II cards were released in 1990.  Perhaps my lack of recollection is due to the over produced 1990 TMNT Movie trading cards, which Topps also distributed to the eager buying public that same year.  Whatever the case may be, the second series also included 88 cards and 11 stickers so if you’re wanting a complete set; don’t stop at series 1!

Sorting through these old cards brings such a peace to my spirit which I cannot quite describe.  The tactile sensation of flipping through small pieces of cardboard and sorting them out instantly transports me back to those lazy summer afternoons when there were no worries and time seemed of infinite supply.  When I was young there was a heartfelt belief that trading cards were an “investment” and that we would be paying for our college by collecting these stupid things.  Instead you can buy a full set now for less than they would have cost back in 1990, so anyone who purchased them for profit will have these at the bottom of the closet along with their Beanie Babies and Norman Rockwell plates.  They do hold a different type of value however.  It’s the value of an instant spark of memory.  Seeing some of these images takes me back to times and situations that I haven’t given consideration in decades.  They are like keys that unlock portions of your memory that haven’t been accessed for countless years.  Once a memory has been sparked, it’s amazing how your mind expounds upon it, linking you to other people, places, and things that you’ve all but forgotten.  Those memories are what makes these cards priceless.