The late 1990’s was a special time in video game history.  The gaming industry was maturing, two dimensional graphics gave way to 3D worlds, technology was giving gamers experiences they never would have thought was possible previously, and there was intense competition between established game companies and a powerful newcomer.  For me personally the late 90’s were the years I took gaming most seriously and I was really invested in the hobby.  I was old enough to make my own decisions and was aware of the business side of the industry, but still young enough that I didn’t have any real responsibilities and actually had time to play the games I bought.  These days I own more video games than I ever would have dreamed was possible, but I almost never play anything due to that pesky period of life called adulthood that we all naively looked forward to as children.  “At least you get paid to go to work! School is a waste of my time!” Probably one of my dumbest all time quotes.

In 1998 I was switching the cables hooked up to my TV between two game consoles: the Nintendo 64 and the Sony PlayStation.  A friend of mine owned a Sega Saturn but he was one of the extreme minority to buy into the console and by the summer of ’98 it had almost entirely disappeared from the scene and Sega had lost it’s place as a company of any significance.  Sony of course was a newcomer to the video game business and they quickly became the leader in marketshare.  Nintendo was the established name but a series of missteps had knocked them from their perch into second place.  In 1998 I enjoyed both the Sony PlayStation and Nintendo 64 but leaned more towards the N64 and it’s lineup.

When the summer began the game I was playing most was WCW vs. nWo: World Tour.  Pro wrestling was experiencing a renaissance and I was just getting into WCW so picking up this gem was a no-brainer.  Up until World Tour’s release most pro wrestling video games relied on a complex system of button combinations to pull off different maneuvers.  In essence, wrestling games were typically little more than poor quality fighting games inside of a squared circle.  AKI came up with the groundbreaking grappling gameplay that was used in all of the N64 wrestling games they developed through WWF: No Mercy.  The gameplay introduced to us in World Tour is a major reason why the N64 is home the best pro wrestling games ever made.

In a nutshell, rather than walking up to an opponent and pressing some whacked out button combination that you would need to remember, you simply press the grapple button during your approach.  Moves are then pulled off by pushing a direction on the D-pad and an action button.  It was simple, user intuitive, effective, and allowed for a wide variety of different moves depending on where the grapple was activated and if it was a strong or weak grapple.  I loved it.  In fact, I think this game was a major reason why I began shifting over towards the WCW and away from the WWF at the time.  It also came with a cool poster promoting Starrcade ’97 that I proudly hung on my bedroom wall. 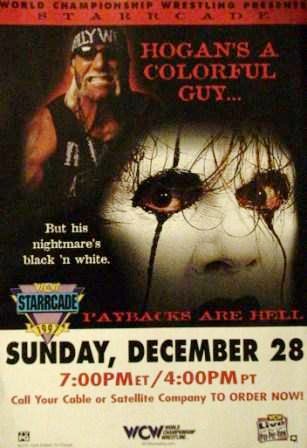 I was a subscriber of Next Generation Magazine back then and they were running several articles on the first RPG for the Nintendo 64 called Quest 64.  At this point I had never played an RPG.  However the concept of a game with an open world where you could roam freely and talk to inhabitants intrigued me, and although the game only received mixed reviews it was published by THQ, the same company that published WCW vs nWo: World Tour.  Since I was such a fan of that game I decided I’d give Quest a try.  When I got home from Target I slammed Quest into the cartridge slot and flipped up the power switch.  After reading the introduction I took control of the main character Brian and explored a massive monastery and a small walled village.  Early on I thought the game was pretty cool!  At that point I had never been exposed to the concept of random battles so imagine my surprise when I left the village and wandered out into the wilderness only to be stopped every 4.7 seconds to fight a menacing Ware Hare.  “What the hell is going on?”  Once engaged in a battle you would stand there and take turns throwing attacks while your movements were confined to a hexagon.  At first I thought maybe the game was defective.  Although I would finish the game and I did enjoy the freedom of exploring a vast world, the random battle thing irked me to no end.  To this day I think it’s the stupidest concept in gaming.  Why are you sitting there taking turns hitting each other?  Have you ever watched a boxing match where the boxers allow each other to trade blows?  To this day I won’t play games like Final Fantasy, Chrono Trigger, or any other JRPG because of the random battles.  What a bunch of crap. 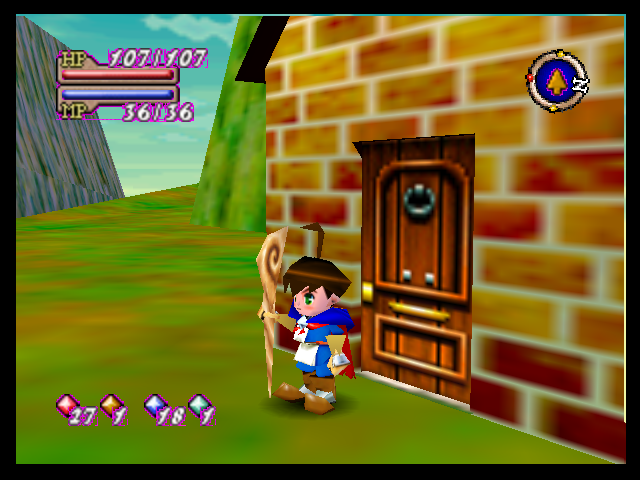 Early in the summer a friend of mine stopped by the house and brought over Tomb Raider II.  Lara Croft was making waves in the gaming world in the late 90’s due to the compelling gameplay of the Tomb Raider games, tremendous sales, and of course her gravity defying knockers.  Rumors abound on the internet in those days about a “nude raider” code that would allow you to play through the game with a buck naked Lara Croft.  As an adult I’m not sure why anyone would be aroused by blocky pixelated boobies but it was a fun rumor to discuss at the time.  A local Blockbuster used to have pretty good deals on used games.  Tomb Raider II was released around Christmas of 1997 and by summertime I was able to pick up a used copy for $10.  So I yanked the RCA plugs out of our old VCR from the N64 and hooked up the trusty PS1 to play the newest bargain adventure.  Unfortunately my PS1 had problems with overheating so I’d have to turn the entire unit upside down for adequate ventilation.

Tomb Raider II put Lara into more interesting and exotic locales than the original game.  While the first Tomb Raider was played exclusively within caves and abandoned ruins, the sequel let you wander through Venice, Tibet, China, and even an oil rig.  What’s funny is that even though I really enjoyed this game, I never got hooked on it enough to finish it.  To this day I’ve only played through about half of it.  What turned me off at the time was that the controls were always a bit clunky.  Lara moved on a grid which necessitated precise maneuvering and placement to accomplish some of the required jumps.  One slip up would result in death which frequently set you back quite a bit.  I didn’t have the patience for that.  In fact I still don’t.  Part of me wants to go back and give this game another try but I have a feeling it’s just never going to happen.  Some of these games are better remembered than experienced years later and I have a feeling that Tomb Raider II is one of them.

I had always wanted a video camera as a kid and our family was too cheap to buy one.  When I saw ads on TV for the new Game Boy Camera I thought it might be an excellent low cost entry camera for myself since I couldn’t afford an actual camcorder.  So I went out and bought a black Game Boy Pocket and the Game Boy Camera to go along with it and thus began my film career.  Needless to say the quality wasn’t all that I hoped.  Game Boy Camera did have some fun built in mini games and some amusing features.  Space Fever II was a fun vertical scrolling shooter that I whittled away a few road trips playing and Ball was a juggling game that used the faces from captured images.  Although I did make a few clumsily edited animations with it, the ability to record anything of substance was non-existent.  The user could also add stamps to still photos and draw on them ala MS Paint.  It was a fun time waster but obviously limited and I was never able to produce any grand epics with it, although it does have the distinction of being the first device I used to take a dick pic. 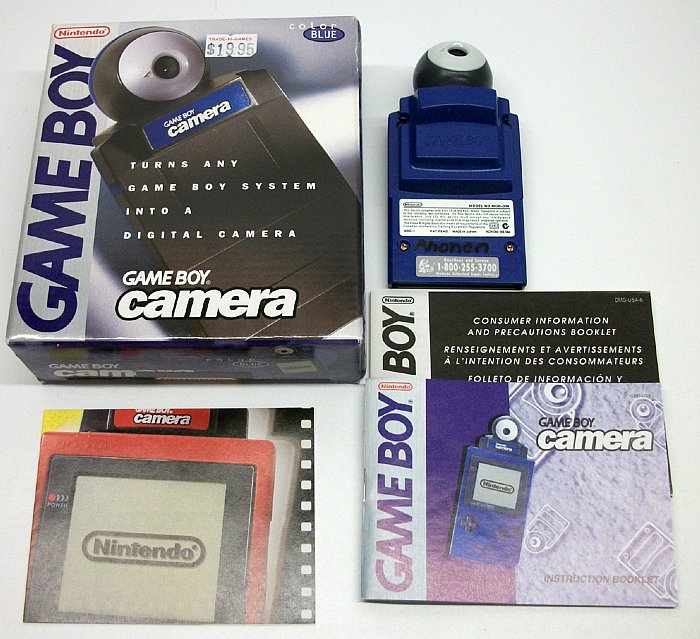 These weren’t the only games I was playing in the summer of 1998.  Another favorite I was playing heavily which I’ve already broken down in detail was GoldenEye 007 which I consider one of the finest games ever made.  I was also playing NHL Breakaway ’98 for the N64, and Warcraft II: The Dark Saga for the Sony PlayStation.  Little did I realize that 1998 would only get better as summer turned to fall.  Later in the year classics like The Legend of Zelda: Ocarina of Time, Star Wars: Rogue Squadron, WCW/nWo Revenge, and Turok II Seeds of Evil would be released.  Although people these days knock the 5th generation of game consoles, it was one of my favorite periods in gaming.  It’s when I was introduced to CD quality sound, 3D graphics, larger games, and more adult oriented themes.

One thought on “Summer of ’98 Part V: Video Games”