As the dog days of summer transition into the cooler, colorful season of autumn, Halloween comes ever closer. Once we get into September at my house, it is pretty much time to start celebrating Halloween, and for me that begins with horror movies. Now I watch horror movies at any time of the year, but the Halloween time period encourages the viewing of horror movies. And since I have a very large collection of horror films, there are always plenty to choose from.

Among the various categories of horror films, a sub-genre that I especially enjoy is the anthology film. Let’s face it, sometimes horror movies are too drawn out, just to make it a feature length film. Anthology movies don’t have this problem. An anthology consists of a varying number of stories all in one film. Now each story can go as a long or short as it needs to be. Over the years, there have been many different horror anthology films, but a majority of them aren’t any good. So, I have picked out my top 5 of the ones I have seen.

1. Creepshow
This is justifiably the most popular horror anthology of all time. Stephen King and horror icon George A. Romero decided to channel the spirit of their mutual love of E.C. comics to bring a horror anthology to the big screen. The five segments included in the movie are all ooze a comic book feel. With primary colors being prominently displayed, with reaction shots of characters reacting with drawn backgrounds. The stories are the typical EC comics style, in which despicable people’s horrific actions come back to haunt them.

The first segment called “Father’s Day” is about a greedy family that gets picked off by their father who died years later and just wants his father’s day cake. The second story is “The Lonesome Death of Jordy Verrill” and features a performance by Stephen King himself as a bumpkin who becomes covered in grass after touching a meteorite that crashes in his yard. “Something to Tide You Over” has Leslie Nielson bury his unfaithful wife and her lover, Ted Danson neck deep in the sand of a beach as the tide comes in and drowns them, but has to then answer to their water-logged corpses. The Crate is about a creature that lurks in a crate in the depths of a science building at a university, and a man who uses it to dispose of his nagging wife. The last segment is my favorite, as a germophobic, elitist businessman is besieged by a horde of cockroaches during a blackout in New York City. Most of these stories about bad people get what’s coming to them in horrific, grisly ways. With Romero’s style, this movie stands above all in the genre. 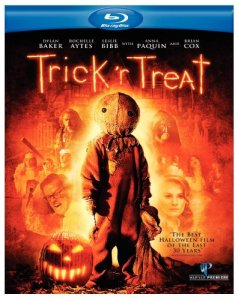 2. Trick r Treat
What separates this one from other anthologies is that it is not presented as distinct stories, but different stories taking place in the same town on the night of Halloween, with certain characters crossing paths throughout. The stories don’t play as single units, they are followed throughout the film. The various stories involve a Principal who doubles as a serial killer, a group of teenage girls looking for fun, a group of young kids playing a prank on a shy girl, and an old man who despises the holiday and doesn’t give candy away to children.

That character is menaced by “Sam” a small creature with a hood over his head, and is positioned in this movie to be to Halloween what Santa Claus is to Christmas. Sam appears at least once in every storyline and ties this movie together. Some may haggle and argue this isn’t an anthology because the stories aren’t separated, but I think since each story has a separate ending, it fits in as an anthology movie.

3. Tales From The Darkside: The Movie
George A. Romero had a great experience making “Creepshow” that he decided to bring it to the small screen. When he couldn’t get the rights to the name, he instead he named his horror anthology series “Tales From The Darkside” featuring stories by a variety of different writers including Stephen King himself. It lasted for 4 seasons and spawned this one movie. For all intents and purposes, it is “Creepshow 3” with a different name. It containing 3 stories, one of which was based on a Stephen King short story.

The first story, “Lot 249” is a tale involving a mummy being awoken and hunting down College students. This one features performances by Christian Slater, Juliane Moore, and Steve Buscemi. The make up effects really put this segment over the top, especially the work on the mummy itself. The second segment is based on a Stephen King short story and is called “The Cat From Hell” and is about a hitman hired to kill a black cat after an elderly man says it has led to the deaths of his entire family. This is more comedic than scary, but it has a very effective ending that I won’t spoil here, but a certain image has been stuck in my mind since the first time I saw it in childhood. The last segment, “Lover’s Vow” is more sad and romantic than scary, and is about a man who witnesses a gargoyle killing people at a bar late night 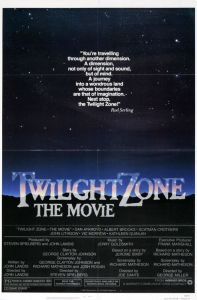 4. Twilight Zone: The Movie
Another movie adaptation of a television anthology series. It is difficult to rank because there are 2 weak segments to start the movie, but the final 2 are so great, they put it over the top. The first segment, “Time Out,” is about a racist man thrown back in time to suffer abuse at the hands of oppressors. This one is pretty bad, and doesn’t really have an ending. The behind the scenes story of this segment is more interesting than what is on screen, as Vic Morrow and 2 child actors died during a helicopter stunt. The second segment, “Kick the Can,” is directed by Steven Spielberg and is the corniest thing he has ever done, and that is saying something. It is about elderly people at a nursing home given a chance to be young again. I thought this was a horror movie, but Spielberg didn’t get the memo, as this one is sappy and upbeat, which really sticks out in comparison to the other stories in this movie.

Fortunately, Joe Dante takes the reigns with the next story, “It’s a Good Life,” which is an adaptation of a classic Twilight Zone episode about a boy that can make his every wish come true, to the horror of every adult in sight. This is definitely the most visually impactful segment, almost cartoon like in parts. The last segment is an adaptation of “Nightmare at 20,000 feet” about a terrified plane passenger who sees a monster on the wing. John Lithgow’s unhinged performance makes this easily the best part of the movie, as even though we see the monster, it wouldn’t be that strange to discover that he is just a crazy person who has no business being on an airplane.

5. Creepshow 2
Like most sequels, this one isn’t as good as the original. However, since the original was so great, even a step down from the original is still a damn good movie. The wraparound story is weak, it is animated and not well animated at that, in contrast to the grisly tales that follow. The first one, “Old Chief Wood’nhead,” about an old wooden Indian that comes to life and avenges the death of its owners, lasts too long and unfolds predictably. Thankfully the next two pick up the slack. 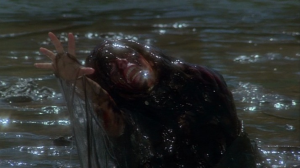 “The Raft” is a Stephen King adaptation about a group of college students menaced by an oil slick on a lake. The make up effects in this section make up for the crappy, tarp looking oil slick. The last segment, “The Hitchhiker” is the most memorable, featuring a woman who hit an ran over a hitchhiker, only to have his corpse following her, always saying, “Thanks for the ride, lady!” What is missing from this movie is the sense of style the original had. Whereas the first one tried to imitate the feel of a comic book, this one is blandly filmed. But even though it is a step down, it is a step up from the majority of the genre.

There are others that I haven’t mentioned like V/H/S, or Cat’s Eye. But this is a good starter for anyone who has an interest in this genre. Unfortunately, the genre which hit its zenith in the 80s hasn’t really had a comeback, which is unfortunate. Today a lot of horror movies are full of filler, and not that interesting. The anthology works great because it doesn’t require a lot of set up or exposition, and anyone with talent could come up with a punchy horror tale. Fingers crossed that the genre comes back someday.

One thought on “Horror Anthology Films”