I’ve always had a soft spot for the M-Tron series of Lego sets.  Since my first set was the Pulsar Charger it’s probably not coincidental that I’ve always gravitated towards our little red and white clad friends.  Unfortunately the sub-theme was introduced when I was only six and the bulk of my earliest sets seemed to be of the castle and pirates variety so by the time I had my own expendable cash M-Tron had been replaced by other factions.

One set in particular had always caught my fancy as I leafed through the Lego catalogs; the Mega Core Magnetizer.  It was an absolute behemoth of a vehicle which traversed the rocky terrain utilizing six oversized wheels and sheltered it’s inhabitants as it cruised along with an enormous neon green windscreen.  In addition to that this thing was absolutely packed to the brim with magnets, which was the focal point of the M-Tron theme.

Several years after it’s discontinuation Lego Shop at Home catalog did feature it again and re-released it in limited quantities but I couldn’t scrape together enough cash at the time to make the purchase.  It seemed that I was destined to always have this set on the “want list”.  But a few years ago while searching online I found a deal that I couldn’t refused and snapped this bad boy up.  In my 30’s my boyhood dream had finally come true as I eagerly assembled this beauty on my living room coffee table.  It was SO worth the wait.

A lot of the things I wax on endlessly about on this website I owned in childhood which means I view them through the tint of my rose colored nostalgia glasses.  To someone not familiar with those items they might look at them or encounter them at some point and think to themselves “what’s the big deal here?”  The fact that I’ve been so impressed with this set despite not having it as a child should be a testament to it’s greatness.  There’s no nostalgia here. No rose colored glasses.  No sappy sentimentality.  No other synonyms that I can toss in here to increase the drama of what I’m saying.  This set is just pure awesomeness.

So where do I begin?  First of all M-Tron is a theme without a home.  Whereas the other space factions I collected; Ice Planet, Spyrius, Blacktron etc had a couple of landing pads or raised base plates, the M-Tron guys were nomads.  They were on an endless quest to scour the galaxy in search of the elusive and prized trans-neon green crystals.  That means the gargantuan Mega Core Magnetizer functioned as the hub of the M-Tron astronauts.  What could be cooler than a mobile command base?

The two traits that immediately stick out to anyone drooling over the photos of this bad boy are the huge wheels and the mammoth cockpit windscreen.  I love them!  Craters and rocks are no problem for this monster and the huge cockpit window provides amazing visibility for our three astronauts within.  Usually those plates were reserved for land bases so seeing one on a vehicle gives it an extremely unique appearance.  Raising the cockpit reveals seating for the three M-tron figures included with the set, a pair of control sticks, some computerized panels, and a pair of walkie talkies.  I guess there’s an onboard radio so that the two guys that debark can take one off the rack and still communicate with the driver. 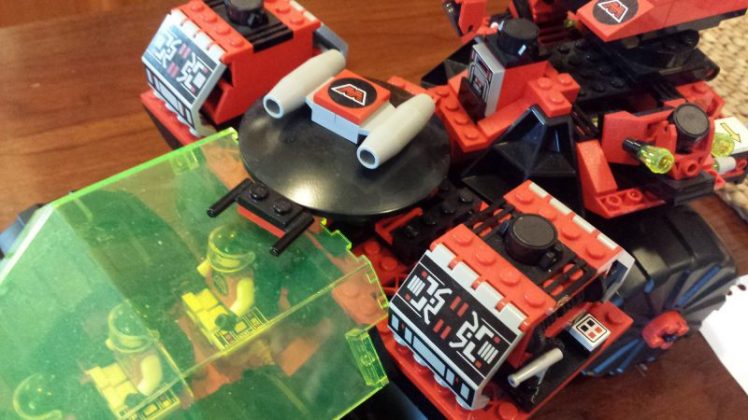 Immediately behind the cockpit is a big circular piece with an M-Tron logo.  This has two functions.  When lowered it locks the cockpit screen into place and also acts as a handle.  By twisting it right or left the vehicle is capable of turning.  Raise it up to unlock the cockpit.  On each side of the lock are large magnetic storage containers.  After all, you have to have some things for these guys to do right?  One big box is empty.  I guess you’re supposed to fill it with whatever you find in your travels.  The other one is filled with tools and a couple of small backpack containers that have a fuel hose and nozzle attached.  These will come into play later.

Now we get to the back half of the vehicle where the most prominent feature is a giant crane.  It’s kind of strange.  Mounted to a plate that rotates 360 degrees it also has a hinge that allows the whole thing to angle downwards.  It’s really only capable of reaching the ground directly behind the vehicle as a result.  It’s rather difficult to describe or perhaps I’m just not a good enough writer to paint a clear picture so I’ll let photos taken with my out of date smartphone do the talking for me.  After all they say a picture is worth 1,000 words.  Well get ready for 2,000 words coming at you!

There.  Got it?  Welcome back.  So the crane is odd but serviceable.  The arm extends and retracts by spinning the wheel on the side of the crane.  At the end of the extending arm is a magnet that allows you to pick up the cargo boxes included with this set.  But that’s not all.  The rear also houses a couple of surprises.

Strangely housed on either side of the crane are two small vehicles; a rover and a small flying craft.  Each one contains a magnet so I think the concept here is to allow the crane to load and drop the small craft, and then when finished to store it again.  Then again, it’s Lego so you can do whatever you want with it.  Maybe I’m trying to over-analyze this since I’m a 30+ year old playing with toys that say “ages 9 to 12” on the box.

Finally the two thrusters on the back of the vehicle  hinge aside allowing a ramp to lower down.  Inside the compartment is another rover vehicle which means you get 3 smaller vehicles to go along with the main set.  The ramp is awfully steep so I feel sorry for the guy that has to load and unload that little car as it must be terrifying.  Another option is to use the interior space for cargo storage, or better yet, fill it with more M-Tron figures, arm them with blasters, and repurpose the Magnetizer as an assault vehicle.  I mean it does look rugged and I’m sure it could take a pounding.  It’s time to show those filthy Blacktron thieves who’s boss.  If your M-Tron guys are more peaceful than mine the fuel packs can be used to keep the smaller vehicles topped off while they scout for suitable mining locations.  Unless they aren’t fuel packs.  Maybe they’re flamethrowers?  Or used to drill?  I guess it all depends on your personality.

Even 27 years after release this thing is still a blast to play with.  Apparently I’m not the only one who thinks so as this set has attained legendary status and is highly sought on the secondary market.  If you’re a fan of classic Lego space sets, this is a must own.  If you are a Lego fan and come across one, this will turn you into a fan of the classic space sets.  If you don’t like Lego at all, why did you slog through this crappy piece?