Nickelodeon debuted a children’s game show in the fall of 1986 called “Double Dare” which quickly became the most popular program on the network.  Most of the challenges contestants faced would get them messy in some shape or form with a green slime substance taking center stage.  Internally referred to as “gak”, the slime itself became one of the stars of the show and was featured prominently in marketing.  In 1992 Mattel finally paved the way for children to bring a version of the green slime into their homes to the dismay of mothers everywhere.

By 1992 slime had been a popular boys toy for several years.  My first exposure to slime was through the Masters of the Universe and The Evil Horde Slime Pit.  Although I never owned it I had encountered it on a handful of occasions.  Essentially the Slime Pit was a torture device in which a figure was strapped into place while the ooze would slowly descend from the mouth of a large reptile skull, slowly coating the figure.  In Masters of the Universe lore, the slime would turn it’s victim into a mindless zombie slave with no will of their own.  The idea was basic and brilliant at the same time. 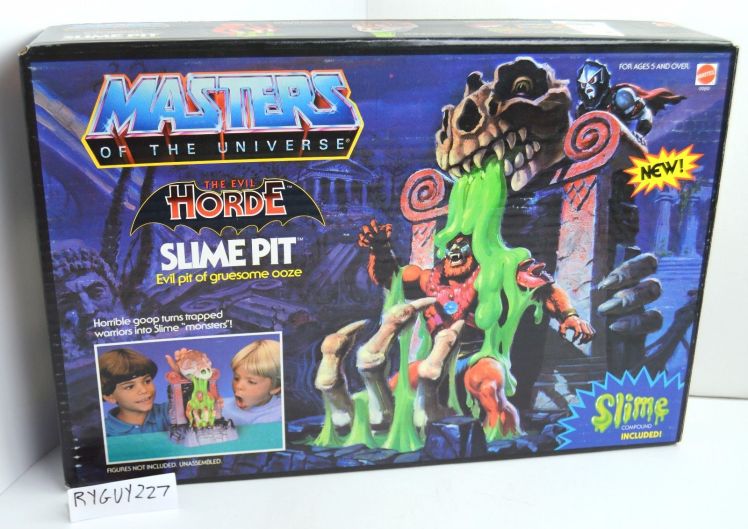 Ectoplasmic residue also referred to as slime played a role in the 1984 Ghostbusters film.  As the franchise began to steamroll the competition in the later half of the 80’s, Kenner would release their own version of slime packaged and marketed as Ectoplasm.  Slime would be featured prominently in The Real Ghostbusters cartoon both as recurring gags or even as primary plot points such as in the episode “Adventures in Slime and Space”.  Although I was a little young to remember the impact of the He-Man version of the toy, this version was the first I dropped onto the living room carpet.  Over time Kenner would market a sub line of figures called “Gooper Ghosts” which were essentially the Ghostbusters versions of the Slime Pit.  In 1989 when Ghostbusters 2 was released, pink slime became the focal point of the entire film. 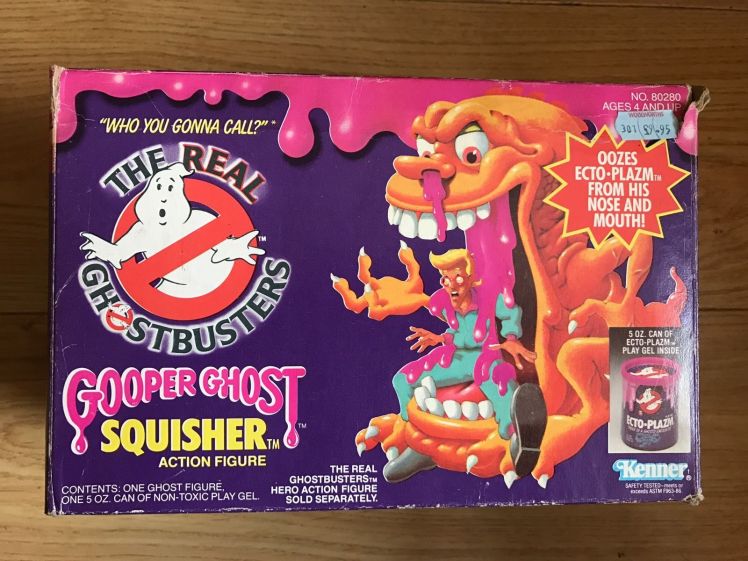 Slime would only go on to become a bigger star towards the end of the 80’s.  Playmates and the Teenage Mutant Ninja Turtles toys would usher the gelatinous substance to new heights packaged as retro mutagen ooze.  As a kid I remember having some kind of slime flinging catapult which I was banned from using with slime pretty quickly.  More cool however was the Flushomatic, which repackaged the Slime Pit concept in the TMNT universe and the action figure Muckman who would ooze slime from various holes throughout the figure. 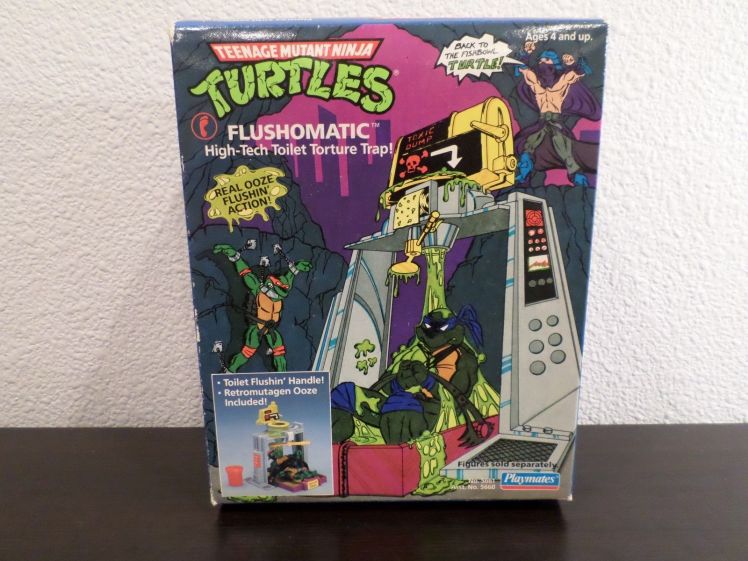 Perhaps it was because there was so much competition that Gak was delayed but after being on the air for 6 years, Nickelodeon finally capitalized on Gak bringing it to market in clear splatter looking containers.  The commercials made sure to note that it makes a farting noise when pressed back into it’s container which was supposed to make us kids clamor for it.  It worked.

Gak was originally released in single colors packaged individually.  Things quickly began to snowball as Gak sales proved successful.  A friend of mine received the Gak Pak for her birthday which was a tub containing three different colors.  Then there was Gak in the Dark which glowed, Solar Gak which changed colors in sunlight, and Smell my Gak which seemed pretty disgusting to me, even at the time.  This Gak was scented to include such enticing aromas as “Stinky Shoe” and “Garbage”.  There were also some activity sets so that you could do some other things with your Gak but I had lost interest long before these hit the shelves. 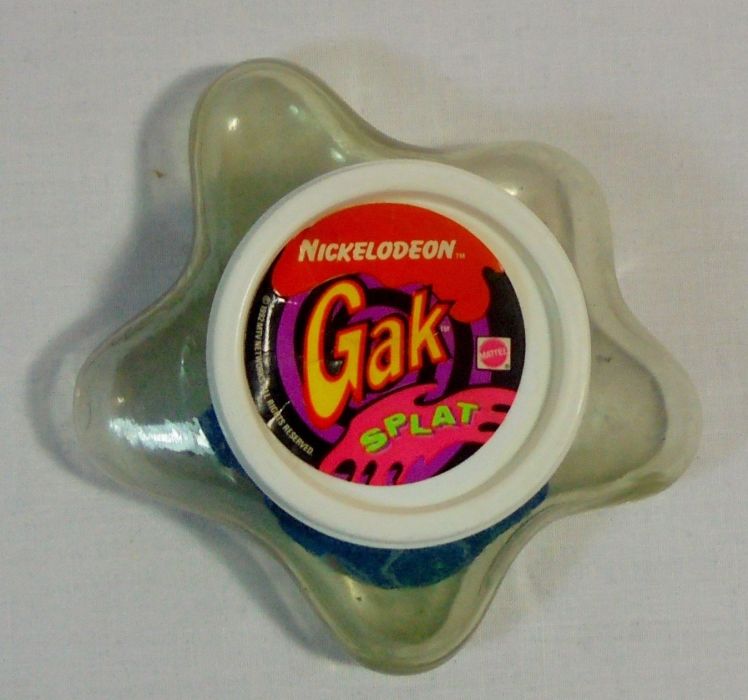 I received the basic single pack of green Gak for my birthday in 1992.  At first I had fun just taking it out of the canister and then pushing it back in so I could hear the advertised farting sounds.  Eventually I began using it as replacement slime for my TMNT figures or simply sat on the couch watching TV with it in my hands, juggling it back and forth after rolling it up into a ball.  It was kind of a children’s stress reliever.  I also enjoyed tossing it onto the wall and catching it off the bounce.  Unfortunately it would leave a small residue spot on impact which eventually got me into some hot water at home.

I had a friend that tossed his onto the popcorn ceiling of his living room which prompted his angry mother to trash it.  My Gak’s demise was much different.  Growing up we had a dog and 2 cats in the house, a vacuum that didn’t work very well, and I had parents that thought it was acceptable to clean once a week.  As you can imagine, there was quite a bit of fur trapped in the shag carpeting of our living room which my Gak would find any time I dropped it.  Typically after each play session there was fur embedded in the Gak.  Unlike my parents, I was pretty particular with my things and I was compelled to make sure it was clean every time I put it away which began a ritual of washing it off in the bathroom sink after every use.  Eventually by adding water to it I caused it to lose it’s consistency entirely.  When I opened the lid to play with it, it had broken down into nothing but a pool of green water.  That was it for Gak!

So what did I miss?  The Gak Vac which sucked up the slime and spit it out.  Gak’s Alive was a metal infused gak that would respond to a magnetic wand which caused it to move and respond.  This one sounds kind of cool.  The Gak Inflator was a pump that would cause the slime to bubble up as you pumped it which allegedly caused it to dry out quicker.  The Gak Copier would take a drawing and clamp it onto the Gak causing an imprint to be transferred.  That one I remember the advertising for but I’ve never seen it in action.

Gak is still available for sale today so it would seem that despite being the last slime product to the market it has had the most longevity.  Double Dare was cancelled in 1993 while MOTU, Ghostbusters, and TMNT have all faded from the public consciousness and subsequently been rebooted as retro franchises became popular again.  Honestly I haven’t handled any of these slime products since they were initially available so I may have to do an independent study comparing them.