A few years ago I listed my favorite Royal Rumble boxes produced by Coliseum Video from best to worst.  Now that August is here it’s only fitting that I follow up that piece by giving SummerSlam the same treatment.  Although SummerSlam is probably considered the WWF (e)’s second biggest event of the year behind WrestleMania, historically I have enjoyed SummerSlam more.  WrestleMania always carried with it some impossible expectations but it seems viewers were more inclined to sit back and enjoy SummerSlam.  All of this is a moot point however as this list won’t be ranking the actual events, but simply the visual appeal of the Coliseum Video boxes.  Since I won’t be including WWF Home Video in this list the eligible tapes range from SummerSlam ’88 to ’97. 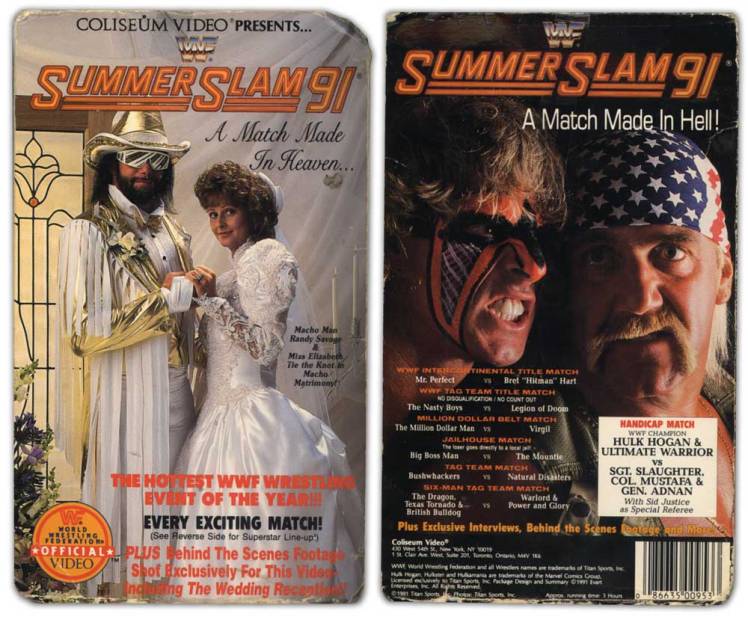 SummerSlam ’91 was an amazing event that included one of the finest wrestling matches I’ve ever seen between Bret Hart and Mr. Perfect for the Intercontinental title.  Unfortunately the box doesn’t give the event justice as top billing goes to the faux wedding between the Macho Man and Miss Elizabeth.  Granted the box utilized a unique two sided design featuring Hulk Hogan and Ultimate Warrior on the back keeping with the opposites motif, (a match made in heaven, a match made in hell) but the wedding photo simply seems out of place for a wrestling event.  It certainly wouldn’t get me excited to purchase the tape.  Even though Coliseum Video had their hands tied because of the event’s subtitle, I feel that they should have found a way to feature actual wrestling on the front of the box. 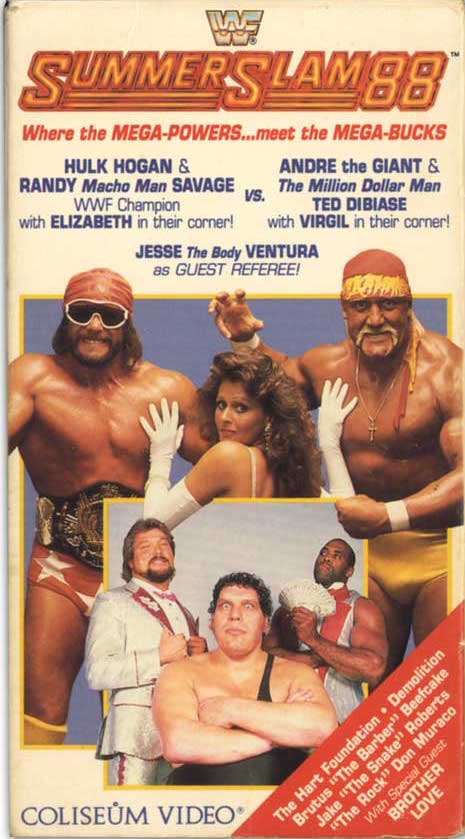 The inaugural SummerSlam carried the subtitle “The Mega Powers meet the Mega Bucks” referencing the main event between Hulk Hogan and Macho Man Randy Savage vs Andre the Giant and The Million Dollar Man.  Had the box simply reused the same graphics as the official souvenir program this tape would have ranked higher on the list.  Instead Coliseum Video sacrificed visual appeal to try and squeeze as much information on the box as possible.   It’s a strategy that was implemented on old fight posters listing the complete card but I don’t find it visually striking.  I particularly dislike that the Mega Bucks were pictured in an inset near the bottom of the box.  It’s bad enough that Coliseum Video tried to cram in as many wrestler names as possible on the cover but the awesome photo of Miss Elizabeth and the Mega Powers is further marginalized by slapping a photo of their opponents on top of it.  Some of these boxes also included a red sticker including the Ultimate Warrior’s name further exacerbating the issue.  Sometimes less is more. 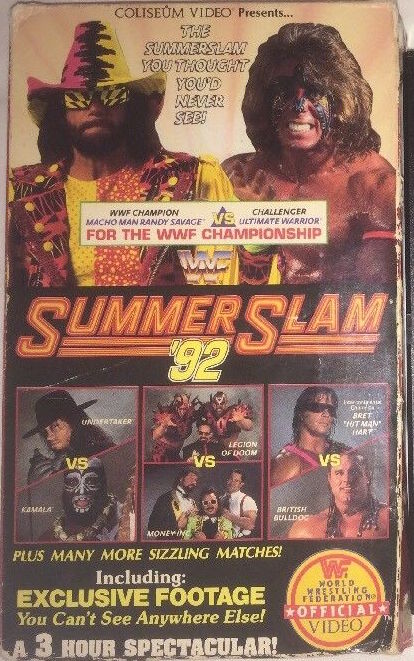 Here we go again.  I disliked the SummerSlam ’91 box from a year prior because the imagery was not consistent with professional wrestling.  That said, at least Coliseum Video had seemingly learned the lesson not to clutter the box with a bunch of words and unrelated images.  Unfortunately the next year for SummerSlam ’92 they fall back into old tropes by giving one of the greatest SummerSlam’s of all time a rather lackluster box.  There’s just too much going on here for anything to really capture and hold the prospective buyer’s attention.  The main event between Bret Hart and the British Bulldog also seems downplayed here by it’s position on the box after a tag team match and Undertaker vs Kamala. 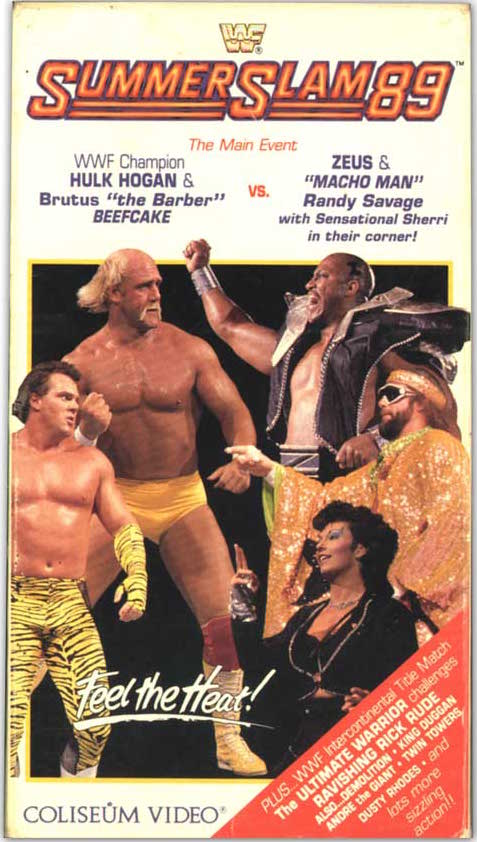 SummerSlam ’89 is polarizing in the wrestling community.  This is mainly due to the inclusion of Zeus in the main event.  I for one have always loved the event and as such this tape logged a lot of hours in my VCR over the years.  The box is very similar to the prior year’s event although it does seem to have been cleaned up a bit.  Rather than feature a large image of the baby face wrestlers and slap an inset of the heels over top of it, Coliseum made the wise choice to give all participants equal box space.  This cleans up the cover enough to make it look less cluttered.  The back of the box also did a nice job of running down the card with images of the wrestlers and the same font as the front leading to a nice consistent look.  I’d call this box “solid”. 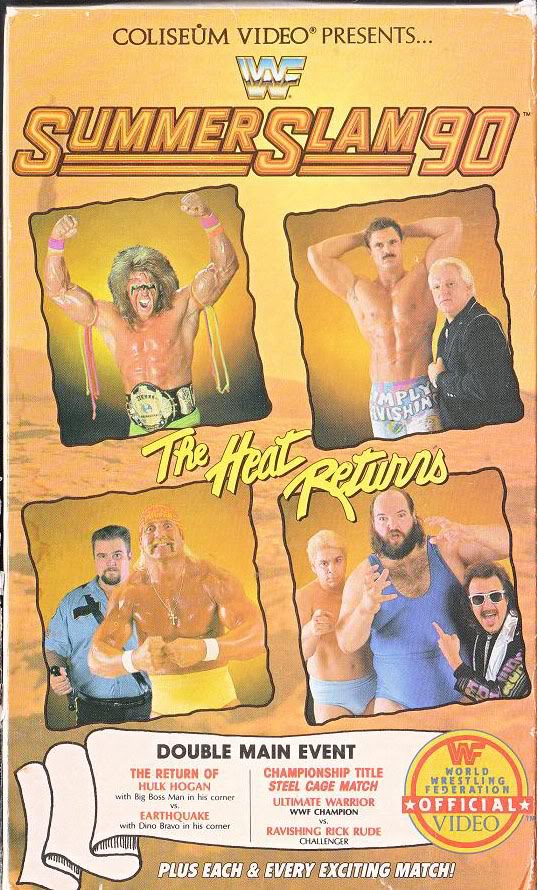 Here’s another solid effort by Coliseum Video.  SummerSlam ’90 featured a double main event; Ultimate Warrior vs Rick Rude in a steel cage match, and Hulk Hogan vs Earthquake.  This box does an excellent job of hyping the double main event while also pushing across the seasonal concept of the event.  Liberal use of warm colors with a nice beach photo as the backdrop gives this a summertime look.  Coliseum Video also stopped listing as many wrestlers as possible on the front of the box which gives this a much cleaner look.  I’ve watched this event a lot in summer’s past, simply because this tape feels like summer.  The box graphics and bright summer colors are a major contributing factor. 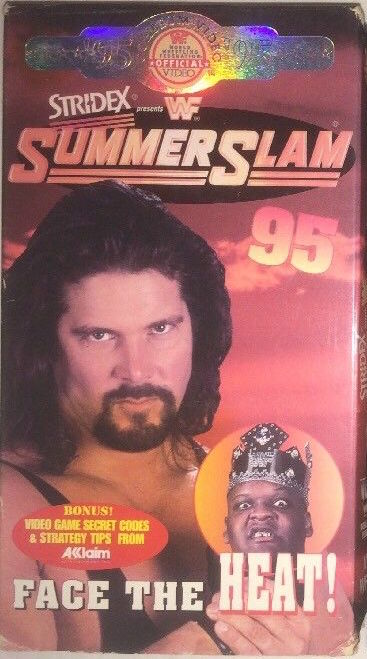 1995 is considered by most to be the worst year in the history of North American professional wrestling and this box is an indicator of why.  The main event for SummerSlam ’95 was Diesel vs King Mabel for the WWF Championship.  Aside from a blurb about video game tips the box cover gives complete attention to the title bout which I like.  In an effort to make King Mabel seem more formidable, Coliseum Video wisely decided to feature only his face in an inset.  The image of his blubbery body in a big purple and gold suit would only have detracted buys.  The backdrop also uses warm colors which gives this a summer time feel.  A good looking box to protect a terrible VHS cassette. 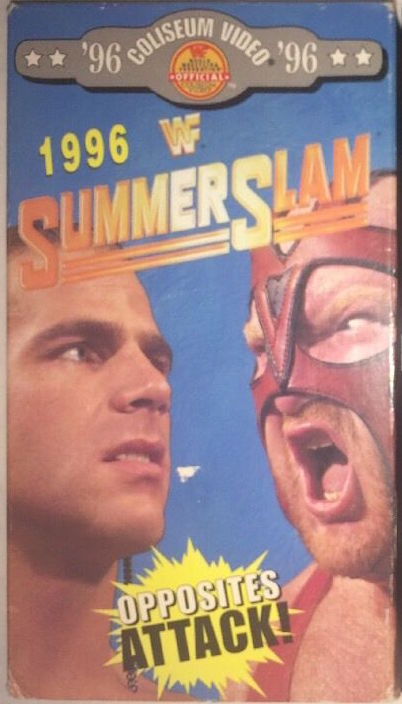 Coliseum Video did another nice job of making a great looking box for a lackluster event with SummerSlam ’96.  The Main event put WWF Champion Shawn Michaels against Vader in what many were anticipating to be a classic.  Instead it was ruined by a series of screwball finishes and restarts which derailed Vader’s momentum as a credible title contender.  On a side note I’m not sure why Shawn Michaels was cast in the role of a babyface at this time in his career.  Much like John Cena, no self-respecting man could have cheered for his terrible pretty boy persona.  His following consisted mostly of women, children, and the confused.  As for the VHS tape, Coliseum Video went with a clean look letting the imagery do the selling for them which makes for an attractive box. 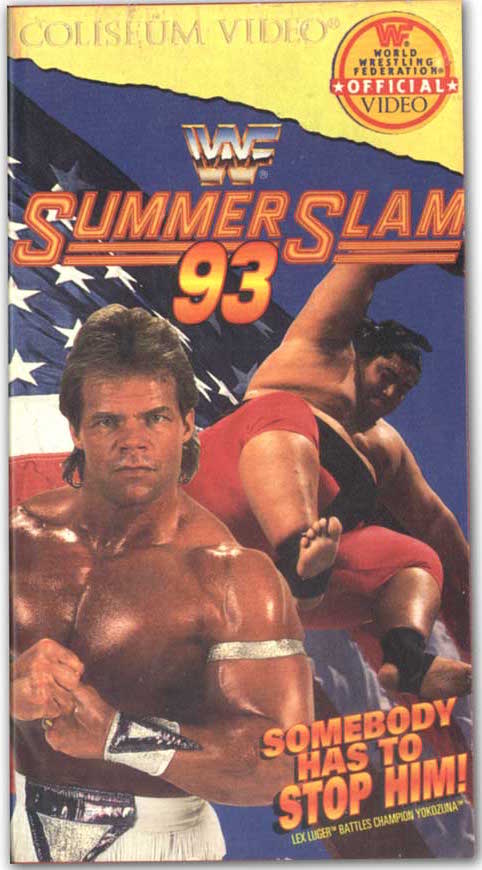 Lex Luger traveled the country in the Lex Express leading up to his showdown with Yokozuna at SummerSlam ’93.  I’ve never considered this to be one of the better SummerSlam’s but the box does a fantastic job of capturing the feel of the production.  Since Lex Luger was rallying America behind him to square off against a foreign menace flags and patriotic imagery were used to sell this card on PPV.  I’ve always been a sucker for the shiny silver “tear” across the top of the box during this era of releases which also plays a factor in why I rank this so highly.  Coliseum Video learned from the mistakes they made on the SummerSlam ’92 box and released a great looking box for a marginal event. 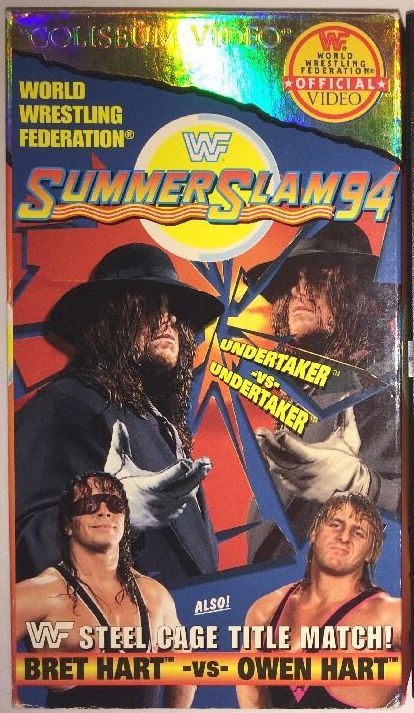 The first event ever to take place at the United Center in Chicago would also be the last good WWF PPV for a few years.  Undertaker vs Undertaker gets top billing on the box although most people buying this tape turned it off after the excellent Bret Hart vs Owen Hart steel cage match.  The SummerSlam ’94 logo gets a little bit of an update and the gold “tear” across the top is present.  Coliseum Video did an excellent job with this cover as it’s attention grabbing, contains bold colors and graphics, and doesn’t provide information overload.  One of the best boxes Coliseum Video ever produced. 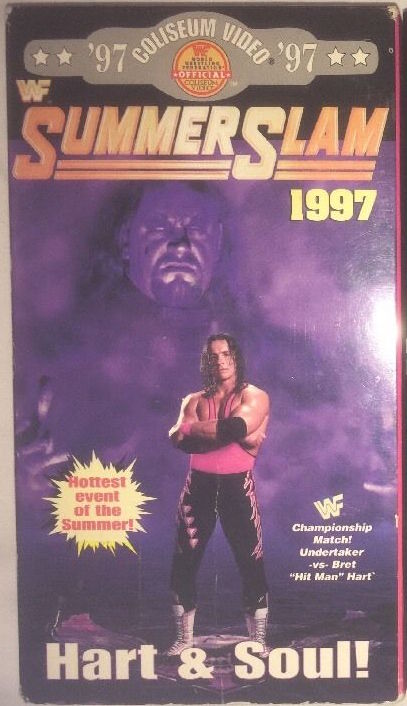 Incidentally the best SummerSlam box Coliseum Video ever made also featured Bret Hart and the Undertaker on the cover.  SummerSlam ’97, Hart and Soul was a fantastic event and the box actually lived up to the quality of the action.  Bret Hart takes center stage in the foreground while the purple storm clouds in the background form an ominous image of WWF Champion the Undertaker.  This was always among the favorites in my collection.

Coliseum Video stopped producing VHS tapes only a few months after SummerSlam ’97 was released.  The company did exit on a high note but it was always a little disappointing that WWF Home Video took over the reigns just as the company began to turn things around.  Although the company was gone as the Attitude Era was ushered in, they were responsible for releasing some of the best events in WWF history, and the SummerSlam’s on this list are among my favorites.