Going into the summer of 1994 when my friends asked me what I wanted for my birthday my response was concise; “LEGO space sets”.  As I approached the ten year anniversary of my birth I was hooked on the space theme and was eager to grab up everything TLG was producing that involved interstellar travel.  Lego had been producing several strong space products for the last several years, and 1994’s offering continued the momentum.

Spyrius was the latest sub theme in the revolving door of LEGO space factions and introduced a number of new concepts.  First and foremost, the android mini-figure made it’s debut as a part of Spyrius.  Second was the focus on large scale robots which acted as the primary ground assault vehicles for our Spyrius antagonists.  Although set #6949 Robo-Guardian was the flagship “robot tank”, in typical LEGO fashion a smaller but still very cool alternative was sold at a more friendly price point.  Recon Robot was my first Spyrius set and one of my favorite 10th birthday gifts. 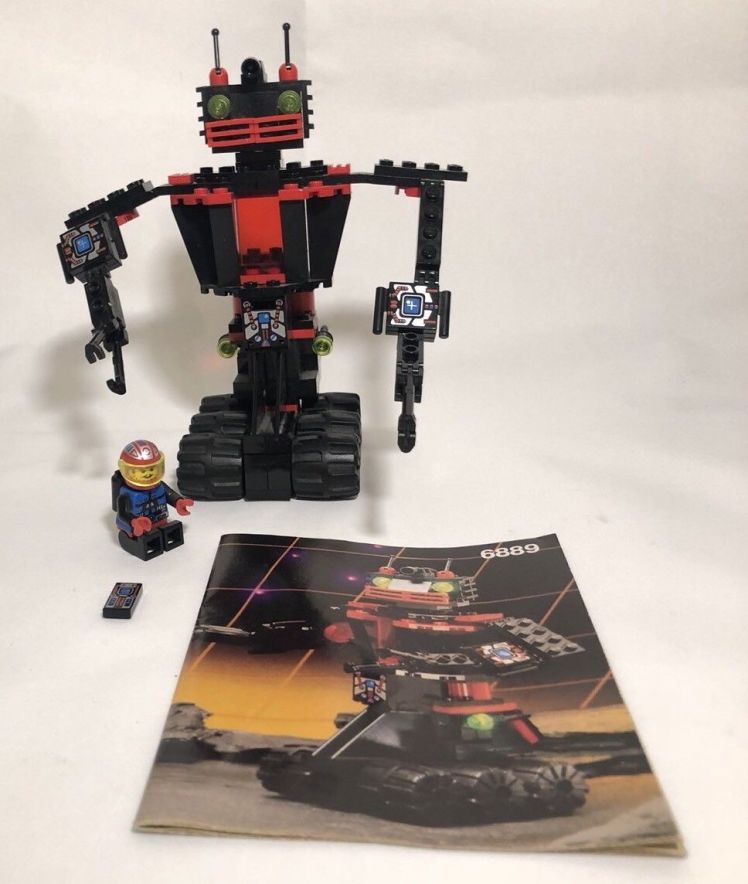 The concept was simple but brilliant; a giant robot that is actually a mode of transportation.  The Robo-Guardian is not an autonomous android but a vehicle controlled by a Spyrius pilot who sits behind a transparent red windscreen in the abdomen area of this space conveyance.  The “controls” consist of a single sloped brick with some kind of target display on it apparently which is apparently sufficient for the pilot to control the speed and direction of the transport as well as manipulate the individual arms and turn the head.  The arms have multiple hinge points and stay in place nicely.  The hands are more like pincers which can grab and torture enemy mini-figs.  The head has some kind of hose that protrudes out of the back and loops over to the top to clip into place.  I always pretended this was a flamethrower.  The Ice Planet guys hated it.

The front of the robot has a box with a slot near the top to slide the included data card into for safe keeping.  Apparently these data cards included some type of top secret information that the Spyrius group was trying to steal.  Most of the Spyrius sets revolve around these data cards and their storage.  It’s simple but fun and something even my daughter enjoys tinkering with over two decades later.  Underneath the pilot’s platform is a storage area for a laser blaster which is also a simple but effective play feature.

Although I eventually owned the entire Spyrius lineup, the Recon-Robot was in many respects my favorite Spyrius set.  Although it wasn’t the largest it packed a lot of features into a modest sized vehicle and the articulation of the arms was far superior to that of the larger Robo-Guardian which required a gear system.  Unfortunately LEGO no longer produces in-house space sets like these as they don’t want to compete with the licensed Star Wars sets.  Although I’m a fan of those sets as well, I do miss the days when Lego pumped out original creations like these.